"Between Goodbyes" by Anita Bunkley 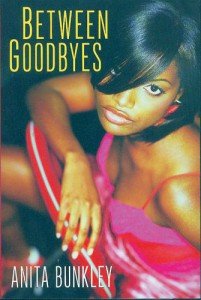 You can say “Yes, how does the day after tomorrow sound?” or “Yes, I’ll buy a pile of bridal magazines and start planning now.”

Or, as in “Between Goodbyes”, the newest novel by Anita Bunkley, you could say “Okay, but first, let me check with the other two men who asked me to marry them.”  Ahhh, decisions, decisions.

Niya Londres is very thankful for the life she has.  Her path to fame started on a refugee boat from Cuba to Florida. But when renegades captured the boat, Niya and her brother fell overboard.  Injured, scared, and fearing for Lorenzo, Niya found refuge at a small diner in a swamp.  Her first break in America was meeting Sandi Lee Holt, who gave Niya shelter and the impetus to flee to Miami.

Niya’s second break was meeting Tremont.  When musician Tremont Henderson spotted the beautiful Cuban dancer, he was smitten and angled a way to make her his.  Soon, Niya was dancing for Tremont’s band, giving rumba lessons to rich Floridians, and wearing Tremont’s engagement ring.  But Tremont was playing fast-and-loose with the IRS, and the game was almost up.

Niya’s third break was meeting Astin Spence at one of her performances. Astin was tall and handsome and owned a resort in Nevada, and he danced with Niya as if they were two parts of a whole. She couldn’t get him out of her mind, even though she was engaged to someone else. Was it possible to love two men?

How about three?  Granger Cooper molded Niya into a Broadway star, which was her fourth break.  He was Henry Higgins to Niya’s Eliza Doolittle, and he controlled what she wore, what she ate, how she spoke, even the kind of music she enjoyed. Granger convinced Niya that she needed him to make her a star, and he pushed for a wedding as soon as possible.

With Tremont in prison for tax evasion, Astin far away in Nevada, and Granger gnashing his teeth in London, Niya needs to make a choice.  Who will hear her say goodbye?

I’ve read quite a few books by author Anita Bunkley in the past few years.  This one catapults her into my “Favorite Authors” category.

“Between Goodbyes” has everything you want in a novel: a heroine who has a few flaws, but is basically good-hearted and very smart; a handsome, rugged cowboy-type guy with a secret; a musician bad-boy with attitude; a rich man with lies on his lips and money to burn; and a best-friend character that turns out to be not-so-friend-like.  Toss them together in night clubs, theatre stages, ghettos, and ritzy resorts, and you know you’re in for a story you won’t want to say “adios” to until the holy-cow ending.

If you’re looking for a great book to jump into this new year, you have lots of choices.  Pick this one.  “Between Goodbyes” is surely one you’ll want to say “hello” to.