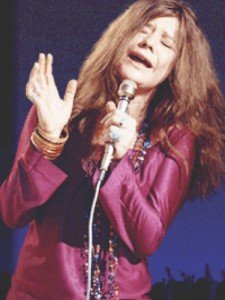 The bio-drama segments feature Marisa Ryan as Janis, who writes and reads from the letters. The concert segments feature Katrina Chester (alternating with Mary Bridget Davies) as the singing Janis who belts out sixteen Joplin standards. There are times when the performers are both on stage, dressed alike (though they bear no resemblance to each other). A third and never seen character (the voice of Paul Hope) is a composite of all the journalists who interviewed Joplin after her first triumph act the Monterey International Pop Festival of 1967.

Ryan and the alternating singers nail down Joplin's voice and mannerisms with pure rawness that flowed in her presence. But while Ryan is often compassionate and witty, the letters are too sketchy to be on an equal footing with the dynamic rock-and-roll concert. The letters reveal Joplin's persistent need for parental approval and love.  Also, they discuss Janis' mother's bout with cancer, her father's valued scholar skills and why she was a misfit during her crucial high school years.

The concert as a concert is a crowd pleaser, Chester (at the performance I saw, and I assume Davies during her days) hold back nothing but go all out to rouse the audience with Joplin favorites such as "Piece of My Heart," "Get It While You Can," "Me and Bobby McGee," "Ball and Chain," and gospel infused  “Mercedes-Benz.”  The singers’ performances bring out Janis’s vocal sound influenced by blues legend Bessie Smith, queen of soul Aretha Franklin and Tina Turner. Janis sound is powerfully raw and soul riveting over rock beats. The arrangement and direction by Sam Andrew, who was a member of both Joplin's original band Big Brother and the Holding Company and the subsequent the Kozmic Blues Band, lend authenticity and nostalgia value. Anyone with sensitive ears should be forewarned that this also means an authentically high decibel level!

• When: runs January 11 through February 10 with evening and matinee performances.  The play is recommended for mature audiences due to profanity.

• Checkout Joplin’s breakout performance of “Ball and Chain” at the Monterey Festival on http://www.youtube.com.