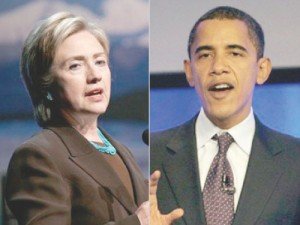 “….Lighten up guys….,” said Senator Hilary Clinton. Well, isn’t that funny!  Senator Clinton wants the media to lighten up on her for “misspeaking” words and an active imagination for saying that she had come under sniper fire during a 1996 Bosnia trip while she was the first lady of the United States.  She described a horrifying scene of her literally running for cover, but video tape brought the truth to light. “I remember landing under sniper fire. There was supposed to be some kind of welcoming ceremony at the airport, but instead we just ran with our heads down to get into the vehicles to get to our base," said Clinton. It was only after Sinbad, the comedian,  and a CBS news reporter who accompanied her on the trip recalled the incident differently and had tapes to back their memory which showed that Clinton and daughter Chelsea  were clearly in a controlled secure no artillery firing setting.

“There was no welcoming ceremony, and we were basically told to run to our cars. Now that is what happened," recalled Clinton to CNN. The welcome ceremony that she said never happened actually did occur when a young girl greeted them on the tarmac.

"I did make a mistake in talking about it, you know, the last time and recently," Clinton told reporters in Pennsylvania where she was campaigning before the state's April 22 primary."So I made a mistake. That happens. It proves I'm human, which, you know, for some people, is a revelation."

Clinton said the error was made because she was sleep deprived. Well, if she is elected President won’t there be many more sleep deprived days. What if she made a slip like that if she were elected President? She could start another world war. We are already in one war that doesn’t make sense. "This is really about what policy experience we have and who's ready to be commander in chief. And I'm happy to put my experience up against Senator Obama's any day." What experience is she talking about….her real experience or her imaginary one? If you really think about it, the only “experience” she really has had is that of being the first lady of this country.

As she has tried to not so cleverly brush this incident under the rug, she is trying to put the negative light that is being shone on her back on Barack Obama and his pastor the Rev. Jeremiah Wright. If you can’t stand the heat, get out of the kitchen I say.

"We don't have a choice when it comes to our relatives. We have a choice when it comes to our pastors and the churches we attend," she said. "Given all we have heard and seen, he would not have been my pastor," said Clinton. As I interpret this, Clinton is saying that because Rev. Wright believes a certain way then the membership of his church should also maintain all of his beliefs... Let’s examine the people in Clinton’s life. If Bill Clinton had an affair with Monica Lewinsky that means he is a cheat. So does that mean she believes in cheating? Will she cheat America? Many Americans have criticized her for remaining in a relationship with a cheater.  She did not leave that relationship, and so far Obama has not ended his relationship with his pastor.

The democratic race for the presidential nomination is getting ugly, and the closer we get to the convention date, the more desperate some candidates get. It is enough to leave them running scared.