"What Moves at the Margin" by Toni Morrison 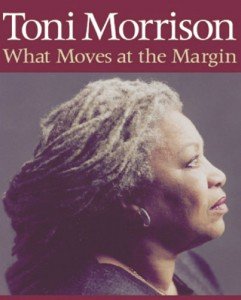 It is quite natural, when you find an author you really enjoy, to want to own a copy of everything he or she writes.

You remember the first time you read his or her words.  The way they sounded in your head. The way they led you on to other thoughts. The way the writing changed your way of thinking or feeling on a new subject.  The way the characters seemed like old friends by time you closed the back cover.

For many readers, author Toni Morrison is one of those writers.  You know how you loved her novels.  Now try her non-fiction by reading “What Moves at the Margin: Selected Nonfiction” (edited by Carolyn C. Denard).  This book, too, might move you and make you think.

In her introduction, Denard says about Toni Morrison that “all you need to know about her and what she cares about is in the novels.”  Morrison has, in fact, said that herself.  But in these essays and speech transcripts (written between 1971 and 2002 and organized in three basic sections) says Denard, we see “no stone unturned in her interpretation of the large and the small of Black life.”

In “Family and History”, Morrison wonders what her grandparents would say about the difference in black/white relations today, in contrast to what they were 90 years ago.  She tells about learning that work is just work, and she explains why many Black women ignored the Women’s Lib Movement.  She writes about dissimilarity between white women and Black women, particularly in relationships with men.  Most poignantly in this section, she tells of collecting history for a book she helped organize, and how it profoundly affected her.

In the middle and last sections, “Writers and Writing” and “Politics and Society”, Morrison remembers authors who made an impression on her; she reflects on a summer spent re-reading books she loved; she writes about time, learning to slow down, and embracing values.

I have many thoughts about this book, and it’s based in sections: I loved one of them, and didn’t like the other two.

The first section of “What Moves at the Margin” is vintage Toni Morrison; her examinations of life both as an African American and as a Black woman. She deeply examines race, history, and racial history.  I absorbed those chapters in the first part of this book, and they made me think hard.

The other two segments are interesting, but in a limited way.  Mostly, they’re book club announcements, stuffy discussions of literature, brief magazine articles from a decade ago, and transcripts of speeches Morrison gave for various functions and awards. These chapters are okay, but not nearly as lively or thought-provoking as the first part of this book.

“What Moves at the Margin” is non-fiction that you should be willing to put it aside now and again: to ponder the first part, and to skip much of the other two-thirds. If you’ve devoured everything by Toni Morrison and need more, read it.  If not, then move to another book.