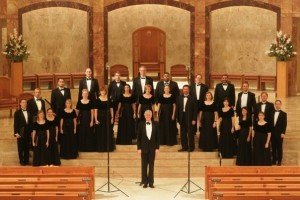 The Houston Chamber Choir gives the Houston community an opportunity to enjoy an afternoon of music while showing support for arts education in our schools. The 11th Annual Invitational School Choral Festival co-sponsored by AMC Music entitled, "Hear the Future" pays tribute to the essential work done by outstanding choral music educators in our region, and their excellent choirs. The Houston Chamber Choir under the direction of Robert L. Simpson will be joined by the Parker Elementary Advanced Chorus directed by Marianna Parnas Simpson, the St. John's School Les Chanteuses directed by Stephen Bedford, and the Cinco Ranch High School Chorale directed by Dorothy Wilson.

Parker Elementary School Advanced Chorus is a part of the 36-year-old music magnet program at Parker Elementary School, HISD Magnet School for Music. Parker has an ethnically diverse population of 800 students - 650 of which receive music instruction thanks to the considerable efforts of the faculty and parents who raise private funds to make the music programs possible. A Title I school, a high percentage are low-income families. The program was recognized as a National GRAMMY® Signature School in 2002. The tremendous effect of music education at Parker is evident: 99.9% of Parker graduates are holding High School diplomas; 90% are college graduates. Most of the Parker students always have music as a part of their lives, not to mention Beyoncé Knowles who attended Parker.

More than 270 students participate in the choral program at Parker Elementary. The Parker Advanced Chorus is composed of 70 fourth- and fifth-grade students, its high level of performance recognized nationally and within the state of Texas. Under the direction of Marianna Parnas-Simpson, Parker Chorus was selected to perform at the Texas Music Educators Association Convention in San Antonio in 2003 and 2005. In March 2007 Parker Chorus was the only elementary school chorus invited to perform at the National Convention of the American Choral Director's Association (ACDA) in Miami, the biannual gathering of 10,000 musicians from the U.S. and abroad. The Parker Chorus performance was considered to be the highlight of the entire Convention. In January 2008 Parker Advanced Chorus performed at the American Masterpiece Festival, sponsored by the National Endowment for the Arts, and in March 2010 will perform for the National Conference of Kodaly Educators in Dallas, Texas.

The choral program at St. John's School has more than thirty years of history involving singers from elementary age through high school. There are six active choirs ranging from fourth grade through twelfth grade with enrollment of well over 200 singers. The concert season for each choir consists of a performance at the school's opening convocation, a fall choral concert, a beautiful candlelight service, and a spring choral concert. In addition, each choir has its own individual singing engagements throughout the year. Stephen Bedford is the director of Les Chanteuses, the ninth- and tenth-grade young women's choir. It has grown in enrollment in the last six years from 17 to 43 members. The dedicated singers of this choir meet twice a week for 40 minutes to rehearse. In addition to their musical talent, among them you will find artists, dancers, actresses, athletes and scholars.

The Cinco Ranch High School Chorale, directed by Dorothy Wilson, is composed of 75 auditioned singers grades 9-12. The ensemble meets daily and on Monday evenings throughout the school year. The Chorale has consistently earned Sweepstakes at UIL Concert and Sight-Reading Contest and been named "Best in Class" at festival competitions throughout the Southwest. In 2008, the Chorale was invited to perform at the Texas Music Educators Association Convention. The Chorale has also performed at the University of Houston Moores School of Music Invitational Concert, the University of Texas Longhorn Invitational and at the Houston Baptist University Invitational Choral Concert. Chorale members are active in athletics, theatre, and dance. Many of the students are members and officers in the National Honor Society, Mu Alpha Theta, FFA, FBLA, and other clubs at school. Chorale members are National Merit Finalists and Semi-Finalists. The students also volunteer throughout the community and sing at nursing homes on a regular basis. The Chorale enjoys many established traditions including "Battle of the Section" contests, creation of a "surprise" song on the Winter Concert, and Singing Valentines. The CRHS Choir aspires to live the quote from Helen Kemp: "Body, mind, spirit, voice! It takes the whole person to sing and rejoice."

This concert is free and open to the public. Artistic Director Robert Simpson founded the Houston Chamber Choir in 1995 with the goal of increasing the awareness and appreciation of professional choral music. Each year audiences eagerly anticipate the group's delightful performances. Their recent Christmas concerts at the historic and beautiful Chapel of the Villa de Matel were sellouts.