“Freedom by Any Means” by Betty DeRamus 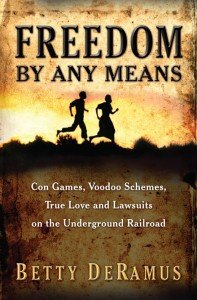 Did you ever want something so badly that you couldn’t think of anything else until you got it?

Maybe it was a vacation you’d been saving for and planning for and couldn’t quite believe you were going to get until you boarded the plane. Perhaps it was a bike or sneakers, a car, job, or house.

No matter what your yearning, it consumed you. Your daydreams were filled with your desire as you imagined what life would be like someday.

But what if that “something” was the difference between life unshackled and life under ownership? In the new book “Freedom by Any Means” by Betty DeRamus, you’ll read about the unusual, unique, and uncommon ways people got what they wanted: a one-way ticket aboard the Underground Railroad.

“According to the usual story,” DeRamus writes about slavery, “slaves gained their freedom by running away, being freed in their owners’ wills, buying their way out… or having someone else buy them.” But these beliefs, as she points out, don’t fully detail the many unconventional stories that sprang from the desire for freedom.

The mythology doesn’t explain how a slave family walked away – in broad daylight – from the auction that would fragment them. To this day, no one really knows how freedman John Bowley spirited his wife and children to safety. DeRamus theorizes that perhaps they were briefly hidden by sympathetic whites until Bowley could move his family North under cover of darkness.

Common belief doesn’t take into account the love of a son for his mother, a woman who once leased herself out from a man who rented her from her owner. Sally Williams had a successful coffeehouse until jealous whites convinced her owner to sell her South, ripping her from her freed husband and son. It took years, but the son – a popular AME evangelist – raised the $400 (about $10,000 in today’s money) to bring his mother to Detroit, and freedom.

Popular credo doesn’t let us fully understand how slaves successfully sued for their freedom in court. Nor does it allow for other stories of note: villages that sprang up, then disappeared. The (often white) people who quietly moved slaves to freedom. Trips from America to Canada and back again, to save loved ones. The trickery, both real and imagined, performed by former slaves and by slave-catchers.

I was excited when “Freedom by Any Means” crossed my desk. Author Betty DeRamus is an excellent storyteller, and it always shows in her books.

While you expect appearances by Harriet Tubman and Sojourner Truth in a book about the Underground Railroad, I like that DeRamus offers vibrant, little-known tales in addition to the more familiar ones. By using documents and research, she brings each true encounter to life, making this a treasure for anyone who loves history or just enjoys a good story.

While this is not a book to breeze through (DeRamus’ writing practically demands contemplation at the end of each chapter), it’s definitely worth a read. “Freedom by Any Means” is a book you’ll want on your shelf.