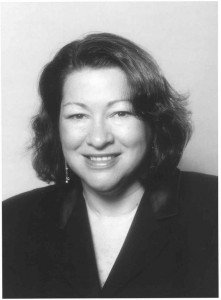 Sonia Sotomayor has served as a judge on the United States Court of Appeals for the Second Circuit since October 1998. She has been hailed as "one of the ablest federal judges currently sitting" for her thoughtful opinions,i and as "a role model of aspiration, discipline, commitment, intellectual prowess and integrity"ii for her ascent to the federal bench from an upbringing in a South Bronx housing project.

Her American story and three decade career in nearly every aspect of the law provide Judge Sotomayor with unique qualifications to be the next Supreme Court Justice. She is a distinguished graduate of two of America's leading universities. She has been a big-city prosecutor and a corporate litigator. Before she was promoted to the Second Circuit by President Clinton, she was appointed to the District Court for the Southern District of New York by President George H.W. Bush. She replaces Justice Souter as the only Justice with experience as a trial judge.

Judge Sotomayor served 11 years on the Court of Appeals for the Second Circuit, one of the most demanding circuits in the country, and has handed down decisions on a range of complex legal and constitutional issues. If confirmed, Sotomayor would bring more federal judicial experience to the Supreme Court than any justice in 100 years, and more overall judicial experience than anyone confirmed for the Court in the past 70 years. Judge Richard C. Wesley, a George W. Bush appointee to the Second Circuit, said "Sonia is an outstanding colleague with a keen legal mind. She brings a wealth of knowledge and hard work to all her endeavors on our court. It is both a pleasure and an honor to serve with her."

Judge Sonia Sotomayor has lived the American dream. Born to a Puerto Rican family, she grew up in a public housing project in the South Bronx. Her parents moved to New York during World War II – her mother served in the Women’s Auxiliary Corps during the war. Her father, a factory worker with a third-grade education, died when Sotomayor was nine years old. Her mother, a nurse, then raised Sotomayor and her younger brother, Juan, now a physician in Syracuse. After her father’s death, Sotomayor turned to books for solace, and it was her new found love of Nancy Drew that inspired a love of reading and learning, a path that ultimately led her to the law.

Most importantly, at an early age, her mother instilled in Sotomayor and her brother a belief in the power of education. Driven by an indefatigable work ethic, and rising to the challenge of managing a diagnosis of juvenile diabetes, Sotomayor excelled in school. Sotomayor graduated as valedictorian of her class at Blessed Sacrament and at Cardinal Spellman High School in New York. She first heard about the Ivy League from her high school debate coach, Ken Moy, who attended Princeton University, and she soon followed in his footsteps after winning a scholarship.