“It’s All Good” by Nikki Carter 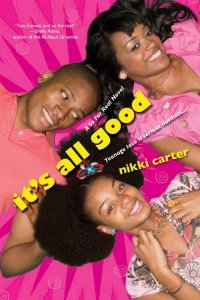 You have enough drama in your life. And it all starts at home. Your mother is always asking favors and while you usually don’t mind, sometimes you just want to roll your eyes hard. Where does she get these ideas?

And then there are your friends. You love them to infinity and beyond but they can make you insane. You wish you weren’t wrapped up in their drama, too, but hey that’s your job, right?

In the new novel “It’s All Good” by Nikki Carter, Gia Stokes is back and totally up in her friends’ business. But that’s not a bad thing, is it?

It’s almost the middle of Junior Year and sixteen-year-old Gia Stokes is pumped. She finally made co-captain of the Hi-Steppers Dance Squad at school and the squad is on their way to the state’s biggest game, where the Spartans are going to be champions. And one of those champions is Gia’s BFF, Ricky.

But Ricky has been all weird lately. He gave Gia a Tweety bracelet at the beginning of the school year and that’s such a boyfriend thing. It’s got her wondering if Ricky’s crushing on her. Because if he is, she likee.

And another weird thing: Valerie, the Hi-Steppers’ other co-captain is so nasty. Sure, Valerie is a senior and it’s her last year in the squad but is that any reason to hate on the girl who was crowned Homecoming Queen? Is that any reason to trash the girl on FaceBook?

As if this can’t get any more dramatic, Mama Gwen got married to LeRon and now Gia has a step-sister. Candy is just a freshman and she’s got a lot to learn, but while Gia’s not so thrilled to have her around, it’s pretty cool to have a little sister. Even if she was a shoplifter once.

And then there’s this new project that Aunt Elena and Gwen have cooked up: a purity group at church they call PGP (Powerful Girls are Pure). Well, you might just as well slap a “GEEK” sign on everybody’s forehead, right?

But as the school year progresses and things fall into place, Gia Stokes learns that things aren’t so bad. In fact, it all turns out to be pretty great.

Okay, so how old is author Nikki Carter, anyway? Because she absolutely nailed teen culture and language, dead-on.

It’s been a long time since I’ve read a young adult novel that’s as fun and fresh as “It’s All Good”. Gia is funny and smart, the kind of girl anybody would like as a friend. Her classmates are well-written (the good and the bad), and the adults don’t come across as completely ridiculous, bumbling fools. The best news is that this is the latest installment in a series, so old fans will be familiar and new fans can start at the beginning.

If you’re looking for a teen novel that’s written by someone who doesn’t sound like your great-grandmother, then look for this one. There are few better than “It’s All Good”.