The Mysterious Pursuit of “Good Hair” 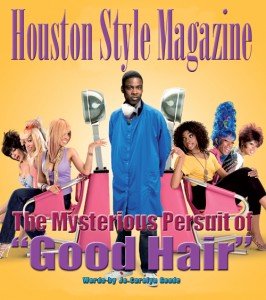 When the first slaves disembarked the ships from Africa along the East Coast of our great country the idea of “bad hair” had not permeated the African America culture. During that time, slaves were conditioned to believe that anything from the white perspective was good and those of the black perspective were bad. Other generations of African Americans were further indoctrinated with this idea with the passage of Jim Crow laws that segregated the African American race from the white race. Oftentimes biracial blacks with light skin not so curly or kinky hair had more privileges than darker skin blacks with kinky hair. Today African American women have gained greater confidence in themselves but some still have the idea that if their hair is kinky, nappy, or curly that it is bad. These are the women who can’t wait to take their daughters (some as young as two years old) to the beauty shop to get their first perms, a chemical process to straighten the hair. The black hair care industry is worth billions. The nation’s first African American female millionaire after all invented the straightening comb and products to keep the hair straight.

African American women treasure their hair. Any man knows that when a woman comes from the beauty shop he may suffer severe consequences if he dares to touch her hair. This is the very reason that many women run away from water, spend their last dime to get a weave split, and bide their time for countless hours at a beauty shop in attempt to get “good hair.” This action has marveled men and others for such a long time, so to have someone like Chris Rock actually explore this obsession, well, is right on time.

“Daddy, how come I don’t have good hair?” said 5-year-old Lola Rock. That simple question set Chris Rock on a journey to find out why that conclusion was drawn by a sweet, innocent child who had been told that everything about her was good. “I tell my daughters I love them 70 times a day," he says. "I hug them and I kiss them - I'm that kind of a dad. To hear my daughter did not like something about herself when I'm telling her she's beautiful every single minute of the day really had me thinking about hair.” The destination of Rock’s journey is a ground-breaking documentary called “Good Hair.” Visiting beauty salons, hair shows, scientific laboratories and even Indian temples Rock and his team investigated the concept of “good hair” held by so many African American women. In the film he calls on celebrities including Ice-T, Nina Long, Paul Mooney, Raven Symone, Maya Angelou, Salt n Pepa, Eve and Reverend Al Sharpton to give their personal, candid notions about “good hair.” Rock and his team learned more than they ever thought they would. "One thing we didn't really know when we started," says executive producer Nelson George, "was how deeply we would get into this whole question of black men and women, and the financial considerations and intimacy issues that evolve with taking care of a woman's hair. That was something we discovered – literally. Chris is amazed on screen to touch a black woman's hair and realize how loaded that moment was.

That's the moment it hit him. The film really builds on this issue of intimacy and how something like hair can affect how people love each other."

Many African Americans are learning to love their African heritage more by embracing their naturally curly locks rather the straight look. This, too, is explored in the film. Actress Tracie Thomas said, "There are so many pressures to straighten your hair. To keep my hair the same texture as it grows out of my head is looked at as revolutionary. "

“Good Hair” is a revolutionary undertaking and I believe Rock has just tapped the tip of the iceberg of the discussion about hair. The subject of hair and women of any race is one that I think will always leave men scratching their heads.