Queen Latifah On Paying It Forward 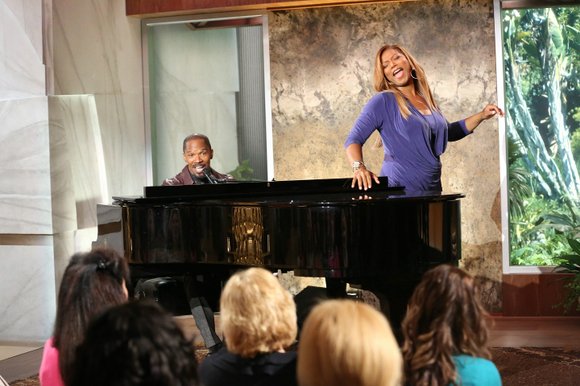 So far, 2010 has been a good year for Queen Latifah. For starters, the Oscar nominee recently turned 40--"It's the most amazing thing, ever," she says of the milestone. Along with riding high off of the success of her fragrance, Queen by Queen Latifah, she's also gearing up for the May 6h release of her book, "Put on Your Crown" and her return to the big screen, with Common and Paula Patton, for the romantic comedy, "Just Wright," opening May 14.

Aside from her professional triumphs, Latifah's always been known to give back, as often as she can. Most recently, she's joined forces with PUR Water and together, they share a simple goal: to ensure that everybody has access to clean water. ESSENCE.com caught up with Latifah to discuss her latest endeavor.

ESSENCE.com: So, why did you choose to partner with PUR?

QUEEN LATIFAH: I wanted to work with PUR Water because they believe that everyone deserves to have clean, drinking water. Many of us are very fortunate to be able to turn on the faucet to get a glass of water, but the Center for Disease Control reports that 16 million people get sick from the domestic, drinking water--in our own country. Some of our pipes are as old as 100 years old and they contain copper and lead and dirt and rust. Even if the water that's traveling through them is clean, there are so many contaminates and microbes that can be picked up along the way.

PUR Water has packets that remove 98% of the contaminants from dirty, drinking water and so far, they're on their way to providing their two-billionth liter of clean water. They make faucet mounts and pitchers, too, so you can have pure, clean water for your fridge at home, which is good for your health and the environment because we'd all cut down on buying so much bottled water. The one thing that doesn't get filtered out, though, is fluoride, which we need for our teeth.

ESSENCE.com:How has PUR Water been helpful to the global community?

LATIFAH: There are so many commercials on television that show children around the world drinking from rivers and streams that are filled with garbage. That's all they have to live on, but it makes them sick.

I'd just partnered with PUR when the earthquake happened in Haiti and my first thought was, "What can we do? Can we get on the ground to distribute these packets?" When I reached out to them, they were already on their way down there to offer help. In addition to providing six million packets, they were there when we asked for support for the SOS: Help for Haiti benefit concert in Miami. They really showed up with financial support to help us.

Dania Ramirez is involved as well. She's an actress from the Dominican Republic and she took packets to her country, which borders Haiti, and showed people how to use them to clean the water. Each packet creates 10 liters of clean water, which is enough water for one child, for a one week. That means a lot.

ESSENCE.com: Why do believe it's so important to give back?

LATIFAH: Well, I believe that we get desensitized by what we see--whether someone is being killed on television or we watch as a house goes up in flames. There are a lot of harmful images that are replayed and reenacted right in front of us.

We see what the brutality of humanity has to offer, so I think that giving back is the compassion that we have to offer each other, as human beings. When you touch someone with a little bit of love, their whole life story can change. We are all connected.