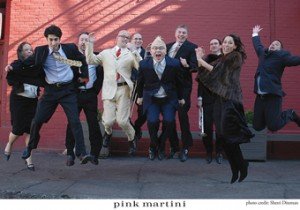 When describing their music, band pianist and founder, Thomas Lauderdale, said, “All of us in Pink Martini have studied different languages as well as different styles of music from different parts of the world, so inevitably our repertoire is widely diverse. At one moment, you feel like you’re in the middle of a samba parade in Rio de Janiero, and in the next moment, you’re in a French music hall of the 1930s or a palazzo in Napoli. It’s a bit like an urban musical travelogue.”