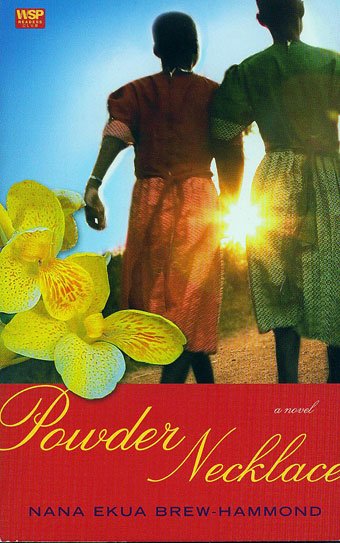 If you’re like most adults today, you heard that about once a month when you were a teenager. You were grounded more times than a broken-down airplane: grounded for missing curfew (10 o’clock; nine on a school night), for not keeping your room clean (it was your room, right?), and grounded for not being respectful to your elders (no comment).

You can laugh about it now, though. Your parents’ rules made you into a pretty good person and you knew they meant well. But in the new novel “Powder Necklace” by Nana Ekua Brew-Hammond, a young girl’s mother makes some decisions that don’t seem quite right.

Lila Adjei should’ve known better. For most of the 13-year-old’s life, her Ghana-born mother claimed that boys would “spoil” Lila, and that she should avoid them. No problem; boys really didn’t impress Lila much anyhow. Still, it surprised her when Mum flew into a rage upon learning that Lila had been inviting a friend-boy over to do homework.

It surprised Lila even more when, after being told that she would stay at Auntie’s house to give her mother “a break”, she realized her Mum was driving toward the airport. Alone and horrified, Lila was put on a plane bound for Ghana.

As a native Londoner, Lila had only the barest idea what faced her in Ghana. She spoke some Twi, but no other Ghanaian languages. She’d be staying with her mother’s sister, but Lila barely knew the woman. And what about school?

The answer came all too quickly: Lila was sent to Dadaba Girl’s Secondary School where she no longer had her own bedroom, but slept instead in a dorm. Everybody called her a broni, a black white girl. And those steamy showers she once enjoyed? They were a thing of the past: baths were taken outdoors from a bucket she had to carry herself. And that was if water was available. If it wasn’t, she did what the other girls did, and powdered her neck to look like she’d bathed.

As the weeks passed, Lila prayed that her mother would bring her home but when she was finally fetched back to London, it wasn’t for long. Mum always said God knew what was good for everyone, but how could such turmoil be anything good?

For a debut novel, “Powder Necklace” isn’t bad. Author Nana Ekua Brew-Hammond does a fine job at giving voice to a pampered teenager who not-so-happily endures the whims of adults that only want “what’s best for her”. Basically, Lila is a likeable and believable character.

What’s not believable is the multi-city, multi-continent journey that 13-year-old Lila makes in the course of just a few short months. I enjoyed her London-to-Ghana-and-back sojourn (as well as what happened in between), but the NYC-to-Disney whirlwind storyline was pretty far-fetched. It didn’t ruin this otherwise solid novel, but it came close.

If you can ignore that wordy bit of first-time-writer-itis, you’ll find a budding new author to watch. Overall, despite some flaws, “Powder Necklace” is relatively well-grounded.