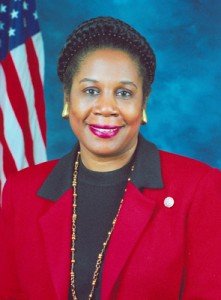 Announcing his support Sunday was Houston City Controller Ron Green, the first African American elected to that position. Green, who is a constituent of Jackson Lee, praised the Congresswoman for the federal funds she has brought to Houston.

“During these challenging economic times, we need all the help we can get from Washington,” said Green at a news conference in front of City Hall. “Congresswoman Sheila Jackson Lee understands that and is fighting to make sure Houstonians get the maximum return possible for the tax dollars they send to Washington.”

Green listed some of the many projects for which Jackson Lee has brought billion of dollars to Houston, including METRO rail, the senior home repair and weatherization programs, funding more cops on the streets, public works projects and relief and recovery funds for Hurricanes Katrina, Rita and Ike.

“I am confident that Congresswoman Jackson Lee will work with the President and others in Congress to deliver what everyday folks so desperately need right now: new jobs and economic development, financial reform that protects Main Street and not Wall Street and finishing the job on health care reform.”

Also announcing their support for Congresswoman Jackson Lee Sunday were the members of Momentum PAC. This political action committee mobilizes young professionals in the political and economic sectors in an effort to ensure long term growth their community.

The members of the group told the Congresswoman that they want to be involved with her on a number of projects, including roundtable discussions on issues and mentoring programs for young people. Jackson Lee expressed her appreciation for their support and told them she could put them to good use for the community.