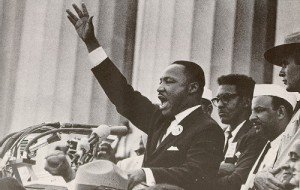 The MLK Parade Foundation proudly presents the 16Th Annual MLK Grande Parade-Houston. This spectacular event is scheduled for Monday, January 18, 2010 near downtown-Houston originating on Allen Pkwy and Taft Street and will begin promptly at 10:00 am. The theme, “Embracing the Brotherhood of Man,” will articulate Dr. King’s message of inclusion while reflecting a culturally diverse parade production. The co-grand marshals for this event are the Honorable Al Hoang, Houston City Council Member and Remo Butler, Brigadier General, U.S. Army (Ret.). The MLK Grande Parade will consist of more than 30,000 individual parade participants to include forty-five of the Nation’s best high school, college, and military marching bands. The parade will be lead by the University of Houston and the 3d Marine Aircraft Wing Band (USMC) of San Diego, California. The parade’s duration is two and half hours along a new 2.5-mile parade route. This is a must see family event. Learn more about all MLK events-Houston by visiting us at http://www.mlkgrandeparade.