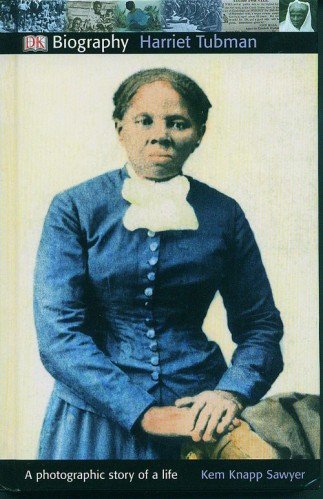 Always keep away from “It”.

That’s the most important rule you learn when you play Hide & Seek. “It” covers his eyes and counts, while you run and hide. Then, while “It” looks for you, you try to get Home safely.

Hide & Seek is a game you learned long ago. You’ve played it now and then but what if it wasn’t a game? What if hiding and getting back home was a matter of life or death? In the new book “DK Biography: Harriet Tubman” by Kem Knapp Sawyer, you’ll read about a serious and brave version of Hide & Seek.

Young Araminta (sometimes called “Minty”) was a slave. Her grandmother probably came from Ghana, and her mother was born into slavery. Although historians think Minty was born in 1822, nobody knows for sure.

When Minty was four years old, she was put to work taking care of her siblings. At age 8, she was sent to live with another family and was taught housekeeping. She didn’t do a very good job, though, and was whipped often. Not long afterward, she was sent back to the farm where her family lived, and she learned to do men’s work in the fields.

In 1844, Minty married John Tubman and changed her name to Harriet.

Maybe because of a severe head injury she got as a young woman, Harriet was a dreamer. She claimed she had visions of flying and nightmares of being dragged off. Her fear was that she would be sold and sent away, and it made the nightmares worse. Soon, Harriet was plotting her escape.

Following the North Star and sleeping in fields and forests, she carefully made her way to Philadelphia, home to 20,000 free blacks. Everything felt different as a free woman, but Harriet missed the people she left behind.

Promising herself that she would bring her family to freedom, too, Harriet took odd jobs and saved money for travel and food. Though she was first a passenger on the Underground Railroad (a secret route to freedom), she quickly became a conductor (the helpers or leaders), eventually leading up to eighty slaves to safety and freedom in the Northern U.S. and Canada.

Filled with true stories that will thrill young readers, “DK Biography: Harriet Tubman” is, despite its title, not just about the woman they called Moses. It’s also about the Civil War, other key people in the flight to freedom, friends and family members of Harriet Tubman, and slaves on their way North.

Although little of the information in this book is new (at least, to an adult), author Kem Knapp Sawyer brings Tubman’s legacy up-to-date, including new scholarly studies that “give a fair representation” to Harriet Tubman. Kids will appreciate the pictures, drawings, reproductions of letters and handbills, and the wealth of sidebars that serve to explain details in the main story.

If your child wants a good biography for fun or for class assignment, look for this one. Perfect for 9-to-12-year-olds, “DK Biography: Harriet Tubman” is a book to seek.