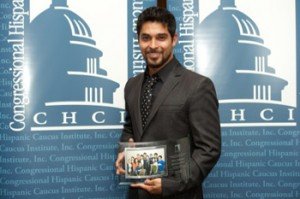 Valderrama also announced the extension of his partnership with CHCI as the R2L spokesperson through December 2012. Since April 2009, Valderrama has appeared at workshops around the country sharing his life story of achieving the American dream and inspiring youth to pursue their own dreams through higher education. Valderrama has also filmed several public service announcements for CHCI.

“This has been some of the most rewarding work I have ever done,” said Valderrama. “It is crucial that we embrace the youth of today for the future of America. When I tell them they can, that’s all they need.”

"Wilmer’s unwavering commitment to CHCI’s Ready to Lead Program exemplifies true leadership as a role model for Latino youth,” said Aguilera. “We need more young, civically engaged Latinos like Wilmer who are dedicated to giving back to the community and using their voice to create positive change.”

The event also featured the signing of a Memorandum of Understanding between CHCI and the Housing Authority of the City of Los Angeles (HACLA). The two organizations agreed to work collaboratively to increase the number of Latino students in the Los Angeles area that are exposed to important information about college affordability, readiness and leadership. More than 70 HACLA students have participated in CHCI’s Ready to Lead (R2L) program the past two years.

“We are proud to partner with the Congressional Hispanic Caucus Institute and look forward to the expansion of our partnership,” said Rudolf C. Montiel, President and CEO of Housing Authority of the City of Los Angeles. “We look forward to providing opportunities to give communities of color possibilities for a bright future. Education is a great equalizer and if young men and women pursue careers in science, technology, engineering and math, they are assured of never needing public assistance.”