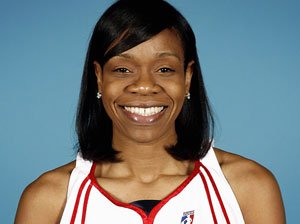 The Sparks are in the post-Lisa Leslie era following the retirement of the nine-time All-Star and three-time MVP. Leslie finished as the league's career leader in scoring (6,263 points) and rebounding (3,307). "I don't think there's any replacing her," Los Angeles' Candace Parker said. "We know what she brought to the team. I think we'll just kind of divide her responsibilities that she did, (and) do it collectively."

With two regulars season games under her belt, Thompson scored nine points Saturday and led her team with nineteen points on Sunday with road losses to the Spark's and Seattle Storm respectively. Thompson is now just 370 points away from Leslie's 6,263 career points, the most all time in WNBA history.

If Thompson stays healthy, she's likely to get there before the season ends. She scored 441 points (16.0 points per game) last season while playing all of the Sparks' 34 games.

Time may be on her side in reaching the most career points of all time in WNBA history record, thereby securing her iconic spot along with Sheryl Swoopes, Cynthia Cooper and Leslie. She looks to have a couple of more seasons in her. But even Thompson doesn't know that.

"I've been on the verge of retiring the last three or four years," Thompson said. When she signed with Los Angeles before the 2009 season, Thompson made it clear to the organization that she doesn't know how long she will continue to play.

"I'm 35," Thompson said. "That isn't old. But 35 is old for professional sports. It's really based on how my body holds up, how long I continue to be able to play at a high level. If I'm not able to contribute the way I feel like I should, I'll walk away. I'll know it's time before anyone else."

Thompson made it clear she won't settle for those four titles from 1997-2000 with the now-defunct Houston Comets. "Every single year after that, I've continued to want to win one," she said. "It doesn't go away. I'm not content to win four. If I can win five or six or seven, that's what I want to do."

Other basketball news Former track and field Olympian Marion Jones returns to basketball by making the WNBA Tulsa Shock roster. She played 3 minutes, 19 seconds in an 80-74 season-opening loss to the Minnesota Lynx, committing one foul and otherwise posting a stat line full of zeroes. But afterward Jones, 34, was wearing her familiar broad smile. "I know that I want to share my story and I want to share my experiences and I'm on the right path," she said.

The NBA Conference finals started with recent champions the Boston Celtics and Los Angeles Lakers defeating the Orlando Magic and Phoenix Suns respectively. The Celtics with little down time after defeating the Cleveland Cavaliers in the Eastern conference semi-final brought a well tuned physical frontcourt game and precision field goal shooting team ready to outplay the Magic. Magic’s Dwight Howard game was shutdown by Celtic’s Rasheed Wallace physical and aggravating game. Kobe Bryant with 40 points led the Lakers to victory over the Suns. Lakers Lamar Odom contributed from the bench with 19 points and 19 rebounds in 30 minutes of play.