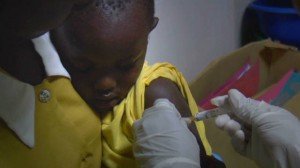 A malaria vaccine has eluded scientists for decades, but preliminary results from a phase 3 clinical trial in Africa are providing hope.

The data suggest that the vaccine, known as RTS,S, cuts the number of malaria cases in half.

Overall 15,000 children in seven African countries are participating in the trial, which represents the furthest that any malaria vaccine candidate has ever progressed.

The preliminary results, which were announced at a malaria forum hosted by the Bill and Melinda Gates Foundation in Seattle, covered 6,000 of the participating children, all aged between 5 and 17 months.

The developers, GlaxoSmithKline and the PATH Malaria Vaccine Initiative, which receives funding from the Bill and Melinda Gates Foundation, said it showed roughly a 50% reduction in malaria cases in a 12 month period following vaccination.

Results from a group of infants between 6 and 12 weeks old will be announced late next year.

“Scientists have been working to develop a malaria vaccine for 40 years, and these findings show that we are on track in the development of a vaccine for African children, those who need it most,” said Dr. Mary Hamel of the U.S. Centers for Disease Control and Prevention, who is one of the principal investigators on the study.

The vaccine is designed specifically for children because their immune systems are still developing, making them the easiest prey for the parasitic disease. Youngsters under the age of 5 account for the vast majority of the 800,000 people who die of the condition each year.

This year, Global Health Frontline News visited trial sites in Kenya, where 2-year old Philip Ouma was getting a booster shot. He buried his head in his mother’s chest as a plunger with an inch-long needle glided into his arm and deposited its contents.

Unlike many of the babies and toddlers in this vaccine trial, Philip didn’t burst into tears or even make a sound.

His mother, Rosemary, enrolled him in the trial because her three other children had repeatedly been sickened by malaria, putting an enormous strain on the family.

Indeed, the entire community felt the strain in their part of western Kenya, where malaria accounts for one-third of all deaths among children.

To administer the trials, the Kenyan government joined with the CDC and the Walter Reed Army Institute of Research.

Dr. Louis Macareo, who directs Walter Reed’s clinical trial center in Kombewa, says this vaccine is different because instead of attacking the parasite, it seeks to boost the immune system. “When you get malaria, it spawns off a cascade of events in your body where your body produces antibodies that fight against the malaria,” he said. “What we try to duplicate with the vaccine is to stimulate the body’s immune system to produce similar antibodies.”

The developers of RTS,S say preliminary results suggest that the incidence of adverse effects of the vaccine are comparable to those found in children receiving other vaccines in this blind trial.

The CDC’s Mary Hamel says there was some increased incidence of fever and associated seizures in the older age group during the seven days following the RTS,S vaccination, but they were rare and all the children recovered.