Serena Williams Does the Crip Walk After Winning The Gold 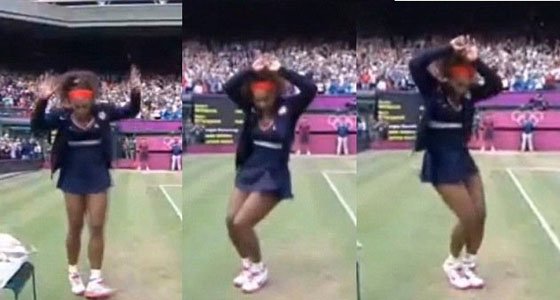 Serena Williams did more than win a gold medal on Centre Court at the All England Lawn Tennis and Croquet Club on Saturday. With a rhythmic celebratory bounce in front of millions worldwide, she inadvertently set off a firestorm that is misguided and dripping with racist, patronizing overtones.

After Williams dismantled Maria Sharapova in a little over an hour for the women’s singles gold medal, she did a dance. And not just any dance. She did the C-Walk. At first, it appeared to be a nod to her sister, Venus, who was cheering in the stands. The broadcasters at the time didn’t even know what to say. They’d clearly never seen it.

To be clear, the “C” in C-Walk stands for Crip. As in the gang. The dance was popularized by gang members from Williams’ home town, Compton, Calif., well before she was born. Over time, it was popularized fondly while its roots were ignored. That’s unfortunate, but understandable. A funky dance is a funky dance.

During the post-match news conference, though, Williams backtracked: “Actually, there is a name. But I don’t know if . . . it’s inappropriate,” Williams said, responding to inquiries about her jig. “It’s just a dance we do in California.”

As is typical these days, the blogosphere had a field day. Bill Plaschke, a sports columnist for the Los Angeles Times tweeted, “Isn’t there some kind of dance done by multi-millionaires who live in exclusive South Florida neighborhoods? Serena C-walking at Wimbledon only shows how long she’s been away from home, separated from violence and death associated with that dance.”

And then there was this from blogger Debbie Schlussel: “Yup, that’s what we need representing America, a Gold Medalist who, upon winning, glorifies hardened criminals who murder each other — and innocent Americans — for sport.”

I, for one, don’t think she has anything to be ashamed of. The tennis star’s Wimbledon C-Walk is no more an homage to gang culture than it is to pop culture. Where was all the outrage when “You Got Served” — a movie that prominently featured a C-Walking dance battle — came out? Is the C-Walk suddenly more taboo as a dance because it happened on the Olympic stage rather than in a second-rate movie?

Brent Barry, a former NBA basketball player who grew up in California, did the C-Walk once at NBA All-Star Weekend. Was he disgracing the game? No, he was just dancing, I guess.

To be fair, MTV did ban videos featuring the dance at one point. But to act as if Williams was somehow trying to celebrate the violence that has taken countless lives in this country misreads the cross-pollination between pop culture and the environments that inspire its dances and songs.

And, if anyone knows about the scourge and pain of how gang violence can rip apart families, it’s Williams: In 2003, her half-sister Yetunde was killed in an incident that was gang-related. Winning a medal wouldn’t suddenly make her forget about a family member getting gunned down in the street.

And let’s not pretend the Olympics are not the place for such brash celebrations, even if loosely affiliated with anything morally inept. The most decorated event of the entire process is something that was introduced by one of the most despicable people to ever walk the earth.

Yes, Adolf Hitler is the one that brought the torch relay to the Olympics. More specifically, it was the idea of a man named Carl Diem who helped organize the Games of the XI Olympiad in Berlin in 1936. Hitler thought it would be a good propaganda tool for his Nazi party.

The man responsible for one of the most horrific and destructive acts of genocide in human history created a tradition that to this day is still one of the most televised events on the globe. And Serena Williams hitting her C-Walk is too offensive for the Games?

Frankly, there was a certain part of me that loved what Williams did. It was one of those subtle moments of celebration that was inclusive and illustrative of her unique upbringing, no matter how complicated that upbringing may be to the outside world.

What you saw Saturday in London on that grass court wasn’t a replication of the steps popularized by a group that terrorized urban communities for years — it was a small example of the cultural zenith that we’ve reached in certain circles. It showed us all just how far we’ve come and also, how far we have to go.