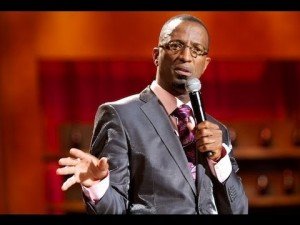 TV One’s got a rookie in town by the name of Rickey Smiley. The comedian and popular radio host got his own show starring himself, Ray J, Lil JJ, Roz Ryan, J. Anthony Brown, and Noree Victoria and Demetria McKinney. “The Rickey Smiley Show” is loosely based on his life as a DJ in Atlanta and single father of three children. Raising kids ain’t easy alone, especially if you’re trying to get your swerve on. J. Anthony plays the role of the radio station manager, ‘Maurice,’ Ray J. as Rickey’s producer and protégé ‘Kenny,’ Roz is ‘Aunt Sylvia’ who lives with Smiley. Lil JJ plays Rickey’s 18-year-old son, a devoted gamer. This is Smiley’s first television series, which may very well be a big hit. “I give much thanks to my Radio One/TV One Family for making this happen! Because of them, the show’s incredible cast, crew, and staff, I look forward to sharing great stories and laughs with our audience every week,” the comedian said. “We have created something very special. Watch and see!” "The Rickey Smiley Show” premieres September 18th on TV One.