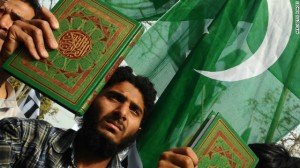 An 11-year-old Christian girl has been arrested after being accused of blasphemy by burning pages of the Quran in Pakistan's capital, Islamabad.

According to a statement released by the president's office Sunday, the girl, identified as Ramsha, was accused by a local resident of burning pages of the Muslim holy text after she gathered paper as fuel for cooking.

Local media reports said the girl has Down syndrome. CNN was unable to confirm these reports, and a local police official said they are not true.

Qasim Niazi, the police officer in charge of the station near where the incident took place, said the girl does not have a mental disorder but is illiterate and has not attended school.

Niazi said that 150 people had gathered on Friday where the neighborhood's Christian population lives and threatened to burn down their houses.

"The mob wanted to burn the girl to give her a lesson," he told CNN.

Other Christian families living in the area have fled fearing a backlash, he added.

The statement from President Asif Ali Zardari said he has called for an urgent report on the incident and added that vulnerable sections of society must be protected "from any misuse of the blasphemy law."

"Blasphemy by anyone cannot be condoned but no one will be allowed to misuse blasphemy law for settling personal scores," said the president's spokesman, Farhatullah Babar.

Critics of the controversial law say it is being used to persecute religious minorities.

Politician and former international cricketer Imran Khan tweeted:"Shameful! Sending an 11yr old girl to prison is against the very spirit of Islam which is all about being Just and Compassionate.

"Poor child is already suffering from Down Syndrome. State should care for its children not torment them. We demand her immed release," said Khan, who now leads the political party Pakistan Tehreek-e-Insaf.

The legislation makes it a crime punishable by death to insult Islam, the Quran or the Prophet Mohammed.

Pakistan is home to about 2 million Christians, who make up more than 1% of Islamic nation's population, according to government statistics.