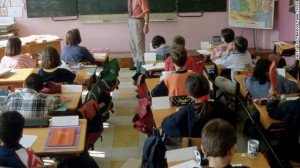 Latino student populations have been on an upward trajectory in the U.S. for decades, and a report released Monday says the group’s growth reached record levels last year, both in public schools and colleges.

The number of 18- to 24-year-old Latinos in college topped 2 million in 2011, accounting for 16.5% of all enrollments, according to a report by the Pew Hispanic Center. The number means Latino representation in U.S. colleges and universities is on par with the percentage of Latinos among the U.S. population, also 16.5%.

“Some of the growth in Hispanic college enrollments simply reflects continued growth in the nation’s Hispanic population - since 1972, the number of Hispanic 18- to 24-year-olds has grown nearly five-fold, rising from 1.3 million then to 6 million in 2011,” the report said.

However, population alone cannot explain the numbers, as eligibility to attend college also is a factor. In 2011, 76% of Latinos age 18 to 24 had completed high school, another record and a 3.5% improvement over 2010 numbers.

At the pre-kindergarten-through-12th-grade level, Latinos made up 23.9% of students in 2011, another record, according to the report from the nonpartisan Washington-based think tank.

The number is primed to continue increasing for the next two decades, with the U.S. Census Bureau forecasting that Latinos will make up a third of the nation’s 3- to 17-year-old children by 2036.

The numbers confirm Latinos as the largest minority group on American campuses, and they show what appears to be a growing divide between Latino students and their African-American counterparts.

While the numbers are records, according to Pew, Latino students have been outpacing blacks in some student population categories for years.

Latinos first topped African-Americans in public school enrollment in 2001. Back then, the respective numbers were 8.82 million to 8.65 million. Today, the number is 12.45 million to 8.27 million, according to Pew.