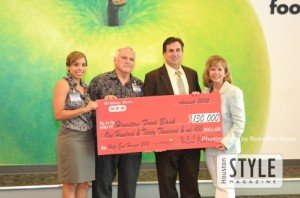 On Thursday, August 30, 2012, Houston Style Magazine was on hand at the Houston Food Bank as H-E-B made a sizeable donation to help feed the hungry. H-E-B customers statewide took a stance against hunger with a record breaking Help End Hunger campaign, raising $444,500 to benefit 15 Texas food banks. This year’s final total surpassed last year’s campaign by $80,200. In Houston, H-E-B customers made the largest donation total in the history of the Help End Hunger campaign. H-E-B officials presented a check in the amount of $130,000 to the Houston Food Bank as result of a tear-pad campaign that ran May 9, 2012 to July 15, 2012.