Rights group: Police rape woman in Tunisia, then charge her with indecency 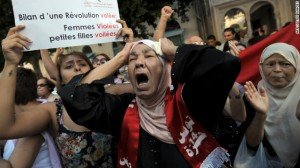 Outraged Tunisians took to the streets by the hundreds Tuesday, angrily protesting the treatment of a woman who was allegedly raped by police officers -- and then charged with public indecency when she filed a complaint.

"At best, charging the victim of a rape by police officers instead of protecting her from intimidation and stigma highlights the deep flaws on Tunisian law and criminal justice system," said Hassiba Hadj Sahraoui, deputy Middle East and North Africa program director at Amnesty International.

"At worst, it is an insidious attempt to discredit a rape victim and protect those she accused of raping her."

The case began September 3 when three police officers approached the woman and her fiance while they were in their car in the capital Tunis, the woman's lawyer told Amnesty.

It was only after she filed a complaint against the officers -- and they were charged with rape and extortion -- that the officers said they found the couple in an "immoral position" in the car.

"This case first shocked public opinion since the innocent woman was raped by policemen," said Salah Eddine El Jorshi of the Tunisian League of Human Rights. "But when the verdict was announced, we were shocked even more that they tried to take this to another level by targeting the victim herself."

See more: Tunisia's President: 'The extremists are a minority of a minority'

Authorities have not specified what they meant by "immoral position," but the claim was later repeated by the country's interior ministry, Amnesty said.

The couple was charged with "intentional indecent behavior," which could yield up to six months in prison.

Both have denied the charges. Tuesday's session is the second of what is expected to be several court hearings on the matter.

The decision to charge the woman incensed human rights groups like the Tunisian League of Human Rights and the Tunisian Association of Democratic Women, who called for protests outside the Tunis courthouse.

"We fear that the treatment afforded to the young woman will deter other victims of sexual abuse from coming forward and as they may fear being treated as the accused rather than the victim," Amnesty's Sahraoui said.

Because of the case, rights groups are taking a closer look at the Tunisian government and judiciary.

"This caused a major upheaval in Tunisian public opinion," Jorshi said. "Some felt that maybe the woman was part of the crime, but others strongly felt that she was solely targeted because she was a woman."

Tunisia is the birthplace of the Arab Spring, a series of revolutions that swept across northern African and the Middle East.

On December 17, 2010, Mohamed Bouazizi, a young Tunisian street vendor, set himself on fire in protest, sparking the movement that still ripples through the region.

Last month, the government rejected a U.N. Human Rights Council's recommendation to abolish discrimination against women in areas such as inheritance and child custody.