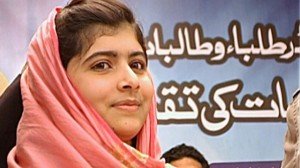 Malala Yousufzai's courageous blogging against the Taliban set her apart from other 14-year-old Pakistani girls.

Growing up in a region once dominated by the Islamic extremists, she knew the fear associated with the word Taliban.

One of her fears came to pass Tuesday, when gunmen sought her out and opened fire on her school van, leaving her seriously wounded along with two other classmates.

Although she is now hospitalized in stable condition and "out of immediate danger," a bullet is lodged in Malala's neck and will be difficult to remove, her doctor said.

The attack began when armed militants stopped a van as it was taking her and two other girls home from school. The attackers asked which girl was Malala, said Kainat Bibi, one of the wounded girls. When the girls pointed Malala out, the men opened fire, Bibi said, wounding the girls before the van's driver was able to speed away. The other two girls' injuries were not considered life-threatening.

Malala lives in northwest Pakistan's Swat Valley -- one of the nation's most conservative regions. Her frustration with the Taliban's restrictions on female education in her town prompted her to use the Internet and speak out, effectively making herself a target.

She reached out to the outside world online, taking a stand by writing about her daily battle with extremist militants who used fear and intimidation to force girls to stay at home.

"I had a terrible dream yesterday with military helicopters and the Taliban," she wrote in January 2009. "I have had such dreams since the launch of the military operation in Swat. My mother made me breakfast and I went off to school. I was afraid going to school because the Taliban had issued an edict banning all girls from attending schools."

Malala's shooting has sparked national outrage -- forcing Pakistanis to take a harsh look at how extremist elements are shaping the nation. "Our society is going through a very critical phase," said Aazadi Fateh Muhammad, a professor of mass communications at Federal Urdu University Karachi, in an e-mail to CNN. "Civil society and civilians are in a war with militants and terrorists in every part of the region."

The attack on Malala, Muhammad said, is an example of this war. "Dark hands," she said, tried to attack Malala's cause, "but it will discourage many others who are fighting for light."

The Taliban controlled Malala's valley for years until 2009, when the military cleared it in an operation that also evacuated thousands of families.

Last year, Malala told CNN she feared "being beheaded by the Taliban because of my passion for education. During their rule, the Taliban used to march into our houses to check whether we were studying or watching television."

She described how she used to hide her books under her bed, fearing a house search by the Taliban.

Malala's online writing against the Taliban led to her being awarded Pakistan's first National Peace Prize last November. Former Prime Minister Yusuf Raza Gilani directed Pakistan's Cabinet to award the prize each year to a child under 18 who contributes to peace and education.

President Asif Ali Zardari strongly condemned the attack, which prompted outrage among residents on local media sites. Also condemning the attack was Prime Minister Raja Pervez Ashraf, who spoke with Malala's father on the phone Tuesday, according to a statement from the prime minister's office.