“Concussions and Our Kids” by Robert Cantu, M.D., and Mark Hyman 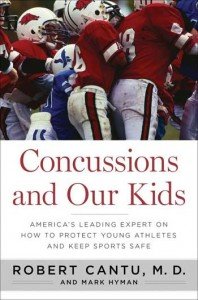 The game, as they say, is the thing.

It’s the thing at your house, that’s for sure. Ever since your child’s friends started playing sports at school, it’s been the number-one topic around. He craves competition. She wants to sign up yesterday. He sees trophies and medals and honestly, you see them, too. After all, having a pro athlete in the family is a good thing, right?

For your child, it’s all about the game. Still, you’ve got lots of reservations and, according to Robert Cantu, M.D., that’s great. In his new book “Concussions and Our Kids” (with Mark Hyman), you’ll see how competition is important, but it’s also potentially deadly.

Playing a team sport was something you enjoyed as a child and you want the same thing for your kids, too, but you worry. Even though your young athlete denies it, you’ve seen enough accidents on the field to know there’s danger out there. Maybe you remember knocking noggins in a game yourself.

You wonder: are your kids safe enough in today’s game?

Maybe not. Sports, says Cantu, are the “second leading cause of traumatic brain injury” for youth ages 15-24. Every sport, no matter how little contact there is between players, has some risk and helmets aren’t always protection enough.

That’s because a concussion can occur from something as minor as a hard bump or fall that snaps a player’s head. Even if they’re expecting it, a tackle or body check can jostle a child’s brain enough to cause damage. If the player is under age 14, his muscles probably aren’t mature enough to withstand a blow.  And if there are multiple injuries, the danger multiplies, too.

To best protect your child, know the symptoms of concussion and be sure your child’s coach knows them, too. Don’t rely on helmets and don’t waste your money on fad fixes. Insist on a baseline brain test before the sports season begins. Lobby for less violence in children’s sports. “Calm down” and remember that the players are just kids. And don’t accept “it’s not cool” as an excuse not to wear protective gear.

That extra-padded helmet might not be “cool,” but neither is being in a coma.

You wince. You gasp. You want to cover your eyes when your child takes a hit on the field, but you should never look away from the play. Read “Concussions and Our Kids” and learn why.

Knowledge is key when it comes to head trauma, and authors Robert Cantu and Mark Hyman do a thorough job in preparing parents to be eagle-eyed on the subject. There’s a lot of information packed in this book, along with myth-busters, blunt words, worksheets, cautionary tales and one modern proverb that you can repeat to kids and coaches alike: “No head trauma is good head trauma.”

There’s always another ball season around the bend but before you sign that permission slip, read this book. With “Concussions and Our Kids” and the knowledge you’ll gain, you’ll see that sports sometimes ain’t no game.