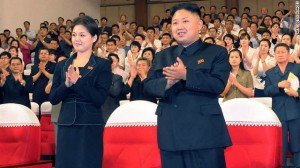 Is she or isn't she? Pregnancy rumors and speculation are swirling around the world but the lady in question is saying nothing.

This could easily be about a Hollywood star but this time, we're talking about the world's most reclusive nation, North Korea, and its first lady.

Ri Sol Ju, the wife of young leader Kim Jong Un, has not been seen in public for around two months, according to North Korea watchers. A photo released by the state-run news agency KCNA shows her back in public and wearing a long coat that could be hiding a bump. Ri watched a football match and attended a musical concert with her husband Monday to mark the 60th anniversary of the Kim Il Sung Military University.

South Korean media has kicked into overdrive to speculate on whether she is pregnant or whether she was kept out of the public eye as a disciplinary measure for a perceived slight. Local media has claimed she may have fallen out of favor for not wearing a lapel pin of the former leaders, a requirement for adult North Koreans.

Kim says the interest in whether Ri is pregnant is far higher outside of North Korea than it is inside, according to his sources inside the isolated nation.

John Delury, assistant professor at Yonsei University says this global interest speaks volumes about the way any news about North Korea is handled.

"Do we track the last time Michelle Obama showed up?" Delury says. "Our minds are so trained to do this with North Korea that we miss the bigger picture which is there is something new --and by almost international standards we could say more normal -- about the way she appears in public."

By announcing Ri Sol Ju as his wife and having her accompany him on many public engagements, Kim Jong Un has shown a personality very different to his late father, Kim Jong Il.

While producing a son and heir for a dynastic regime is considered very important, Delury points out "that's also true for the families of the 'chaebol' or business conglomerates of South Korea, for Hyundai and Samsung," he says. "Even in the U.S. and UK, powerful families are concerned about producing the next generation."