Mermaids: Entertainers with a tail 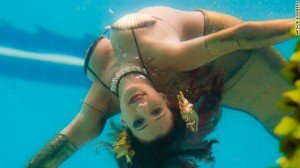 Mythical mermaids have fascinated humans for centuries, and alluring creatures in bikini tops and fish tails seem to be keeping the love alive.

One of the first mermaid shows in the United States can be traced back to Weeki Wachee Springs in Florida, where mermaids debuted synchronized ballet moves at an 18-seat theater in October 1947.

Mermaid shows have evolved from that Florida roadside attraction off U.S. 19. Here are five spots where mermaids are making a big splash:

The mermaid attraction at the Sip 'n Dip Lounge in Great Falls, Montana, started when a housekeeper at the adjoining O'Haire Motor Inn agreed to put on a costume and swim around for guests on New Year's Eve 1995. A glass wall between the bar and the 21,000 gallon swimming pool provided a perfect place for tiki lounge patrons to take in a show.

A live piano bar had been the primary entertainment until Sip 'n Dip general manager Sandra Johnson-Thares and her mother came up with the idea to add mermaids. They thought it would boost the lounge's "fun factor."

"I never in my life believed the mermaid attraction would be such a big hit," said Johnson-Thares. Both locals and tourists are drawn by the kitschy entertainment. Celebrities like "Splash" mermaid Daryl Hannah have stopped in for a visit, too.

"People are fascinated with them, and it's not something you'd expect to see in Montana," she chuckled.

"Some of our mermaids are students and others are moms," she said. "We use the newspaper and radio to advertise for mermaid positions when they open up."

By day, Denver native Allison Wos is an executive assistant at a health care company.But after hours, the 26-year-old transforms herself into a mermaid.

"It's really enjoyable work, and I feel privileged to do it," she said. "Our audiences get a kick out of it, too, and seem mesmerized by our shows."

Wos said she is one of eight women who dress up and perform as mermaids at Denver's Downtown Aquarium, an aquarium, entertainment and dining facility.

One of her favorite aspects of the job is swimming alongside the various sea life in the salt water tanks. "I consider eels, sea turtles, Queensland groupers, yellowtail snappers and a whole host of fish my co-workers," she laughed.

The sea turtles are her favorite because they seem to like the spotlight and interact nicely with the mermaid team.

The "Mystic Mermaids," as they're called, perform daily in a family-friendly show at the aquarium's "Under the Sea" exhibit and in a tank adjoined to the restaurant.

Guests of the upscale Dive Bar are treated to performances by mermaids and mermen mingling with fish inside a 7,500-gallon tank.