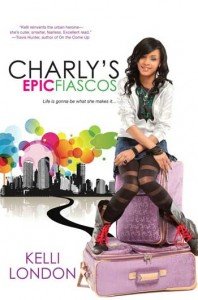 It’s something you simply cannot understand.  It just doesn’t compute. Not in your vocabulary. When you want something – whether it’s a boy, a job, a grade, a pet, or a new gadget you must have – ain’t nobody better say that word to you because you don’t get it.

And you’re not alone: Charly St. James has never met a “No” she likes, either, but in the new book “Charly’s Epic Fiascos” by Kelli London, ignoring that negative word may take her places she really doesn’t want to go.

It was a good thing Mason couldn’t read minds.

He was one fine boy. She wanted him to be her boyfriend, but Charly St. James had been lying to Mason about nearly everything: she was from the South Side of Chicago, not New York. She didn’t just visit her father in Brooklyn; she hadn’t seen him since she was five. And she didn’t have all kinds of money like Mason thought she did. No, Charly worked at a restaurant called Smax’s BBQ and she was hiding her cash so she could buy a phone.

That was because Charly’s mom, Brigette (pronounced the French way: Bri-jeet), had been laid off from her job so she laid claim to every cent Charly made and every nice thing Charly owned. To say Brigette was nasty was being nice.

But on the afternoon that Brigette stole Charly’s bankroll and lost it at the casino, Charly had enough. She packed her belongings in Brigette’s best luggage and left town on the first ‘Hound she found.

New York City was where Charly was headed. Her father lived there – somewhere. Her aunt did, too, and Charly was sure Auntie would help her get an audition for a reality show that would start filming soon. It was practically a done deal, Charly was positive of it. There’d be fame and fortune in her future, for sure.

That is, as long as she could keep away from hustlers, dealers, juvie hall, scammers, creeps, and thieves…

When I first picked up “Charly’s Epic Fiascos,” I was surprised at what I was reading. It seemed to be about a lying young hustler who manipulated everyone to get what she wanted. And this was a book for young women?

Author Kelli London gives her main character plenty of reason for doing what she does, as well as a bit of regretfulness for having done it. Because of the situation in which London paints Charly’s life and because the character is so charmingly cheeky, readers will fall in love with her. I know I did.