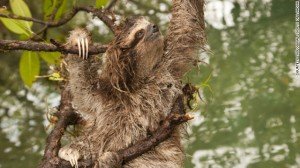 [caption id="attachment_69464" align="alignnone" width="300" caption="There are less than 500 individual pygmy three-toed sloths left in the wild and are only found in on the Isla Escude de Veraguas, Panama."]

The 100 most endangered species on the planet have been identified in a first-of-its-kind list.

Announced during the International Union for the Conservation of Nature's World Conservation Congress in Jeju, South Korea, the list is the culmination of work by 8,000 scientists who identified the animals, plants and fungi from 48 countries that are most in danger of extinction.

Animals like the Hainan gibbon, pygmy three-toed sloth and Luristan newt are critically endangered but perhaps better placed to survive than many of the less charismatic species on the list, said the report's authors.

There is a fear among some conservationists that many of the plants and fungi listed will not be saved or gain public attention because they don't benefit humans.

Jonathan Baillie, Zoological Society of London"The donor community and conservation movement are leaning increasingly towards a 'what can nature do for us' approach, where species and wild habitats are valued and prioritized according to the services they provide for people," said Professor Jonathan Baillie of the Zoological Society of London (ZSL) in a press statement.

"This has made it increasingly difficult for conservationists to protect the most threatened species on the planet. We have a important moral and ethical decision to make: Do these species have a right to survive or do we have a right to drive them to extinction?"

The full list was published in a report entitled "Priceless or Worthless?", which aims to push the plight of less valued creatures or species up the agenda.

"All the species listed are unique and irreplaceable. If they vanish, no amount of money can bring them back," said the report's co-author Ellen Butcher, who is also from the ZSL. "However, if we take immediate action we can give them a fighting chance for survival."

Some species on the list provide economic benefits, such as the swim bladder of the giant yellow croaker fish used in traditional medicine (and by weight worth over seven times the price of gold).

Yet while accepting monetizing nature can be an effective policy in conservation, the wider value of species on the brink of extinction should not be disregarded, said the report's authors.

"All species have a value to nature and thus in turn to humans," said Simon Stuart, Chair IUCN Species Survival Commission.

"Although the value of some species may not appear obvious at first, all species in fact contribute in their way to the healthy functioning of the planet."