Report: Samsung Galaxy S4 due out in February 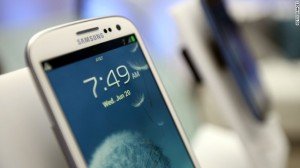 Days after the iPhone 5 was announced, Samsung is reportedly prepared to roll out a new version of its Samsung Galaxy S, the phone that has established itself as Apple's chief smartphone rival.

The Samsung Galaxy S4 will be introduced in February at the Mobile World Congress in Barcelona, Spain, according to The Korea Times.

The report from the Times, the oldest English-language newspaper in South Korea, where Samsung is based, cites unnamed company officials and parts suppliers in the region.

Among the Galaxy S4's features will be a 5-inch screen, slightly larger than the display on the popular Galaxy S III and a full inch bigger than the iPhone 5, the report said.

It will have more powerful hardware and software and will "definitely use" 4G LTE networks, a parts supplier told the paper.

Phones running Google's Android operating system have been outselling the iPhone for some time. But that's a fragmented field that includes dozens of phones of varying quality. No single handset has established itself as a serious rival to Apple's phone.

The Galaxy S III has made perhaps the best claim. Last month, the company announced it had sold more than 20 million units in three months, making September the first month since the release of the iPhone 4S that it wasn't the world's top-selling smartphone.

Snap reviews of the iPhone 5 have been somewhat mixed, at least among the tech media. Many who got a hands-on demo at Apple's Wednesday announcement praised its slimmer, lighter design, bigger display and faster processor. Others said the device failed to produce groundbreaking advances at a moment when Apple, perhaps for the first time ever, finds itself needing to catch up with features available on other phones.

Customer response, however, has been overwhelming.

Pre-orders of the iPhone 5 "sold out" almost instantly (an admittedly arbitrary feat considering Apple controls the supply), with orders topping 2 million in the first 24 hours. That's double the 1 million for last year's iPhone 4S in the same time period.

The phone hits stores Friday in the United States, Australia, Canada, France, Germany, Hong Kong, Japan, Singapore and the United Kingdom. It rolls out in 22 other countries on September 28.

The S4's release would mark Samsung's biggest salvo since a federal court in California ruled that Samsung violated multiple Apple patents in the release of its own products. After the ruling, Apple asked the court to add the Galaxy S III to the list of products that are in violation.

The case was just one of roughly 50 patent disputes in different countries. Some of the other courts have ruled in favor of Samsung.

According to the South Korean news report, Samsung is working with U.S. carriers on modified designs the company said will eliminate any questions about patents.

The report said Samsung plans to fire back in another way, too. Samsung is asking Apple to pay more for the processors it produces at an Austin, Texas, plant and is promoting itself as "the only firm that can guarantee on-time delivery, output commitment and better pricing for mobile application processors," one executive told The Korea Times.