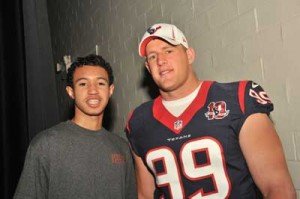 Houston Texans DE J.J. Watt was named AFC Defensive Player of the Week following his performance at Jacksonville on Sept. 16. It is the first time Watt has won the award and the seventh time at Texans defensive player has garnered the honor. Watt followed up a strong performance in Week 1 by leading the team in tackles, recording 1.5 sacks, three quarterback pressures, a fumble recovery and deflecting two passes. It was Watt’s third career multi-sack game and his second of this season. Watt’s five passes defensed are tied for third-most in the NFL and are the most by a defensive lineman. Led by Watt, the Texans defense held Jacksonville to a franchise-record low 117 total yards of offense in the game and only gave up nine first downs. The defense forced the Jaguars into a three-and-out on seven of 12 possessions and did not allow the Jaguars to convert any of their nine third-down attempts.