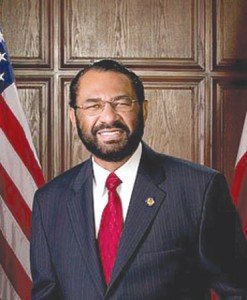 Congressman Al Green spoke about the importance of reaching a deal on comprehensive immigration reform that preserves and reunites families, a principle which could be threatened in a forthcoming deal.

“Strong families are what make strong nations. This is because strong families create strong communities; strong communities create strong economies; and strong economies create strong nations,” Congressman Al Green said. “I along with several other Members of Congress have sent a letter to Senator Charles Schumer of New York as well as the “Gang of Eight” asking for a meeting to explain our position on comprehensive immigration reform. I look forward to continue working to ensure that we find positive solutions to address this complex issue.”

Congressman Al Green emphasized what is at stake for our nation economically if a deal is not reached that respects the role immigrants and their families have and will play in our economy.

“The greatness of America resides in the fact that not all great Americans were born in America. The vitality as well as the integrity of immigrant families is not just important to immigrant communities, but important to the success and prosperity of our nation,” Congressman Al Green said. “We live in a country where 40 percent of the Fortune 500 companies were founded by immigrants or their children. 18 percent or 90 of the Fortune 500 companies have immigrant founders. These companies generate about $1.6 trillion dollars in revenue. Some of America’s greatest brands like Xerox, Apple, Google, AT&T, Budweiser, Ebay, General Electric, IBM, McDonalds, Oracle, Clorox, Boeing, 3M, and Home Depot, owe their origin to immigrants or their children. As a Member of Congress, I will continue to work with my colleagues from both sides of the aisle to put family reunification and preservation at the center of any deal on comprehensive immigration reform.”