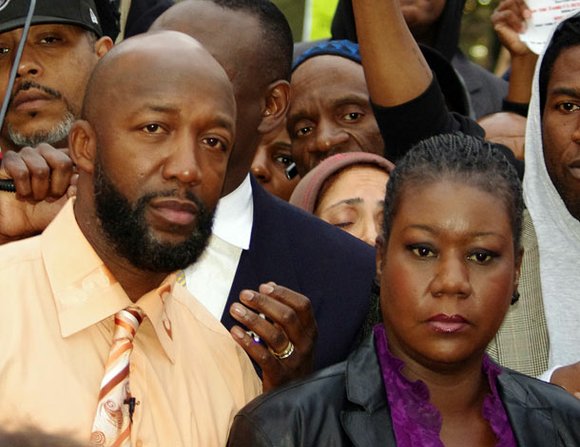 Over 146,000 people across the country have signed on to a fast- growing petition on Change.org launched by Trayvon Martin’s parents, Tracy Martin and Sybrina Fulton, calling on the 21 states with “Stand Your Ground” laws to review those policies following the acquittal of George Zimmerman, who faced second-degree murder and manslaughter charges in the murder of their son Trayvon.

“We’ve started this petition on Change.org as a matter of making sure that no other family will ever have to go through what we have been through,” says Sybrina Fulton. “No parents should ever have to know what it feels like to watch your child's killer walk free.”

According to the the National Conference of State Legislatures, there are at least 21 states that have “Stand Your Ground” laws similar to Florida’s. Tracy and Sybrina’s petition calls on the governors of each of those states to support reviews of those laws. In particular, they hope the states will examine whether the law is written in such a way that it protects the aggressors of situations that result in death.

Juror instructions provided by Circuit Judge Debra Nelson during the Zimmerman trial instructed jurors to acquit George Zimmerman if they felt “he had no duty to retreat and had the right to stand his ground and meet force with force, including deadly force if he reasonably believed it was necessary.”

Following the verdict, President Obama stated in a speech that the laws should be reviewed so that they do not encourage people to "use those firearms even if there is a way for them to exit from a situation." Republican Sen. John McCain also supported the call for reviews, and when asked on CNN whether his home state, Arizona, should review its own “Stand Your Ground” law he said, "I'm confident that the members of the Arizona legislature will...because it is a very controversial legislation.”

“President Obama spoke out on the need for review, and prominent Republicans like Senator John McCain have joined him,” continued Sybrina Fulton. “This is not a Democrat or Republican issue, it’s not ‘black’ or ‘white’ issue, it’s a wrong and right issue.”

Tracy and Sybrina have also started a second petition on Change.org aimed specifically at reforming Florida’s “Stand Your Ground” law, where data from the the Florida Department of Law Enforcement shows justifiable homicides in Florida have risen from an annual average of 13.2 between 2001 and 2005 to an average of 42 between 2006 and 2012, including a record 66 justifiable homicides in 2012. Legislation that died in committee is being re-filed by Florida Sen. Chris Smith.

So far the highest number of signatures on Tracy and Sabrina’s petition are coming in from signers in Texas, Georgia, North Carolina, Arizona, and Florida.

Change.org is the world's largest petition platform, empowering people everywhere to create the change they want to see. More than 40 million users in every country use our tools to transform their communities – locally, nationally and globally.