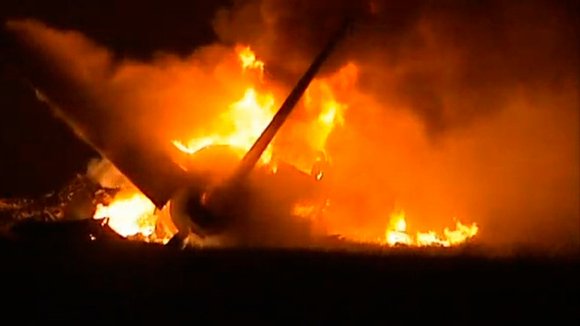 The National Transportation Safety Board has recovered data recorders from the UPS plane that crashed in Birmingham, NTSB spokeswoman Kelly Nantel said Thursday.

By David Mattingly and Tristan Smith

The National Transportation Safety Board has recovered data recorders from the UPS plane that crashed in Birmingham, NTSB spokeswoman Kelly Nantel said Thursday. The recorders will be taken to Washington for examination later in the day.

(CNN) -- Investigators will have to use picks and shovels to retrieve key data recorders from the wreckage of the deadly UPS cargo plane crash in Birmingham, a spokesman for the National Transportation Safety Board said Thursday.

Flames in the plane's tail section kept officials from accessing the flight data and cockpit voice recorders in the first 24 hours after the crash. But firefighters have tamed the flames to the point where officials can start trying to reach the devices, the Birmingham mayor's office said.

"The fire ... has actually created quite an issue for getting to the recorders because it's all burned down, so we'll have to use shovels and picks to be able to sort of sift through that to get to" them, he said.

The devices could help investigators determine why the plane -- which Sumwalt said did not issue a distress call -- went down early Wednesday while on approach to the Birmingham-Shuttlesworth International Airport.

The Airbus A300-600F broke into pieces -- killing the pilot and a co-pilot -- as it crashed around 4:45 a.m. in an open field near a street that runs parallel to the airport. The majority of the debris was spread over an area of about 300 yards, Sumwalt said Wednesday.

Witnesses said the plane, which took off from Louisville, Kentucky, flew low over a neighborhood, striking the tops of trees and knocking down power lines as it crashed.

The crash site is about a half-mile north of a runway, FAA spokeswoman Kathleen Bergen told CNN.

Witness Peter Torres, a Civil Air Patrol member who said he is a former airline mechanic, said he thought he heard what sounded like a backfire from the jet's engines as the plane passed overhead. He rushed to his window.

"I saw the flash" of an apparent explosion, he said, followed by a "boom" that shook his home.

Airport neighbor Sharon Wilson told WBRC the plane seemed lower than usual for flights into the airport and sounded like it was sputtering as it flew overhead.

"We heard this loud boom, like, jump up out of your bed," she told the station.

"It was extremely low," she said. And then it sounded like it was sputtering, like it was out of fuel."

The crew did not report any trouble, Birmingham Mayor William Bell said, citing conversations with control tower officials. Light showers and a visibility of 10 miles were reported in the area of the airport at the time of the crash, according to CNN meteorologist Dave Hennen.