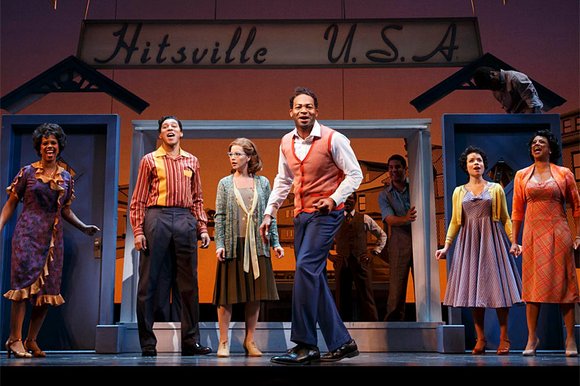 Brandon Victor Dixon (center) and the cast of Motown The Musical.

Raymond Luke, Jr. as Michael Jackson with the Jackson 5 in Motown: The Musical.

Open call auditions will also be held in Chicago at The Oriental Theatre, where the national tour will launch with an engagement from April 22 to July 13, 2014 before continuing across the country with additional cities to be announced.

All candidates must have amazing soulful voices to play different performers from Motown history. All vocal parts are encouraged to attend.

Charl Brown as Smokey Robinson in Motown: The Musical.

For more information on the open call auditions visit: http://www.motownthemusical.com/casting.html

For details about what to bring and what to prepare, email casting@motownthemusical.com

Bryan Terrell Clark as Marvin Gaye in Motown: The Musical.

Sign-In Begins at 10:00am (unofficial sign-in will not be honored)

Sign-In begins at 10:00am (unofficial sign-in will not be honored)

MOTOWN THE MUSICAL, based on the life of iconic Motown founder Berry Gordy, featuring music and lyrics from the legendary Motown catalogue and a book by Berry Gordy, began performances March 11 at The Lunt-Fontanne Theatre (205 West 46th Street), and officially opened April 14.

Directed by Charles Randolph-Wright, MOTOWN THE MUSICAL is the real story of the one-of-a-kind sound that hit the airwaves in 1959 and changed our culture forever. This exhilarating show charts Motown Founder Berry Gordy's incredible journey from featherweight boxer to the heavyweight music mogul who launched the careers of Diana Ross, Michael Jackson, Stevie Wonder, Smokey Robinson, Marvin Gaye and many more.

Featuring all the classics you love, MOTOWN THE MUSICAL tells the story behind the hits as Diana, Smokey, Berry and the whole Motown family fight against the odds to create the soundtrack of change in America. Motown shattered barriers, shaped our lives and made us all move to the same beat. Now, experience the next electrifying chapter in the Motown story, Broadway's record-breaking smash hit MOTOWN THE MUSICAL!

MOTOWN THE MUSICAL features arrangements and orchestrations by Tony Award® nominee Ethan Popp (Rock of Ages), who also serves as musical supervisor for the 18 piece orchestra that reproduces the classic “Sound of Young America” for the Broadway stage, with co-orchestrations and additional arrangements by Tony Award® nominee Bryan Crook (“Smash”), dance arrangements by Zane Mark (Dirty Rotten Scoundrels) and music direction by Joseph Joubert (Nice Work If You Can Get It).