Food For Thought - Mandela, Knowledge & Will 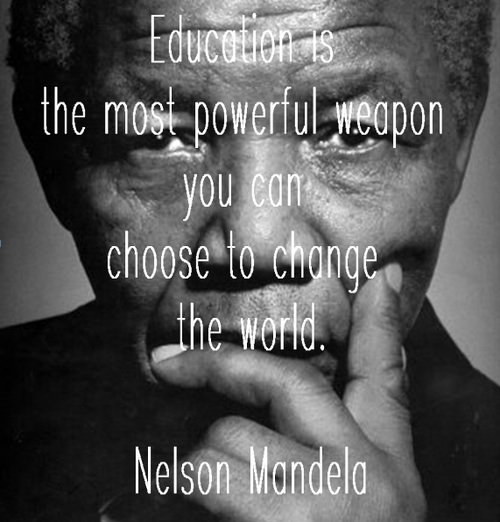 Vince Lombardi once said “the difference between a success and failure is not a lack KNOWLEDGE, but rather a LACK of WILL." With the passing of Nelson Mandela, we lost an individual who was a model of knowledge and will. I continue to believe that we in America know what to do but lack a person on the level of a Nelson Mandela. Where are our leaders who stood beside Mandela in the movement to end apartheid? Does the absence of such a leader today signal not only a lack of knowledge but the will to rally around the cause of fighting for equity?

In America, we are still trying to reach a level of both racial and economic equity. Mandela once said, “Education is the most powerful weapon which you can use to change the world.” I believe that education is the major key to address these issues that plague America. We have come far, but are we regressing as we fail to support such efforts? With such regression, are we turning into a society of haves and have nots?

For more than 50 years, we have continued to focus on the symptoms and not the root causes. For example, we continue to focus on health care delivery, when this is only a small part of what is needed to address the health gap that exists in America. Providing access does not provide the change needed in behavior; changing behavior involves education, and education that people can understand. Yet we continue to focus on things that have not worked and may never work. Here is a novel idea: Why don’t we educate people in a way they can understand, i.e., health literacy?

We do have the tools to seriously address the health gap and arrest the movement to a separate and unequal society. As President Obama recently stated, racism and economic inequities are the two causes leading to the increase in poverty in this nation. The question is: Why are we not effectively addressing these issues? Maybe we don’t know about the existence of educational programs that address both. I doubt it!! But just in case, let me highlight a few programs that have been successful not for a few years, but a decade or more.

The Meyerhoff Scholars’ Program run by Freeman A. Hrabowski III at the University of Maryland, Baltimore is an example. Among the undergraduates at this majority institution are the young Meyerhoff scholars who are both valued and mentored. Within this group are academic stars with perfect math SAT scores, athletes who never earned below an A through high school, college kids under 20 years of age whose work has been published in scholarly journals, and students who regularly earn A's in such courses as genetics and organic chemistry.

A similar initiative, directed by Dr. Rick Cherwitz in the Division of Diversity & Community Engagement (DDCE) at the University of Texas at Austin, is the Intellectual Entrepreneurship (IE) Consortium. IE focuses on a broad array of subjects and not just the sciences. When I spoke to Dr. Cherwitz about his program he immediately said, “the key thing is that IE is not a formulaic program. It is a philosophy and approach to education that focuses on ‘discovery, ownership, and accountability.’ Its success in increasing diversity owes to the fact that it is not a targeted program. Unlike typical readiness and recruitment programs, it is opportunity based--getting students to connect learning and doing. Intellectual entrepreneurs understand that genuine collaboration between universities and the public is tantamount to more than increased "access" to the academy's intellectual assets. It is more than "knowledge transfer"--the exportation of neatly wrapped solutions rolling off the campus conveyer belt. Collaboration demands mutual humility and respect, joint ownership of learning and co-creation of an unimagined potential for innovation--qualities that move universities well beyond the typical elitist sense of "service." Knowledge, after all, involves the integration of theory, practice and production.

Like the Meyerhoff Scholars’ Program, IE has won national acclaim—including recognition by the Woodrow Wilson National Fellowship Foundation, Fast Company Magazine, the Council of Graduate Schools (CGS), Fortune Magazine, Excelencia in Education, and the New England Resource Center for Higher Education—and has been the focus of over two hundred and fifty newspaper, magazine, and scholarly articles. Although the IE model of education and public scholarship has been imitated by other research universities and has become part of national discussions about higher education and the public good, the need for socially relevant research and graduate education, and the role of entrepreneurial thinking in arts and sciences education, more programs like this are needed.

One cannot deny that the value of these programs as a vehicle for increasing diversity inheres in what Cherwitz describes as “their capacity to allow students to become entrepreneurs--to discover otherwise unobserved connections between academe and personal and professional commitments.” The spirit of these programs seems to resonate with and meet a felt need of minority and first-generation students, facilitating exploration and innovation. These programs, and programs like them, change the metaphor and model of education from one of ‘apprenticeship-certification-entitlement’ to ‘discovery-ownership-accountability.’”

“Education is the most powerful weapon which you can use to change the world.” So what is the reason for a lack of real support of education, especially for the underserved—a fear of losing control? In the transition that is taking place in South Africa, the loss of control has not lead to mass retaliations against those who were in control. Although not perfect, and they have a long way to go, it is a model that America should and can emulate. We shall miss not only Mandela for his vision and grace, but also for his will to use knowledge to make life better for us all. Perhaps we should keep in mind Mandela’s words: “It always seems impossible until it’s done.”