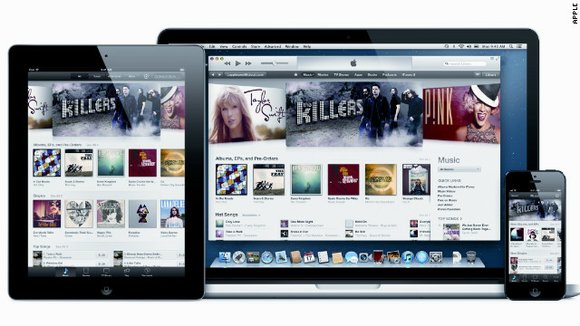 On Wednesday, Apple announced that the 25 bilionth song had been downloaded from iTunes, by a man in Germany.

On Wednesday, Apple announced a pretty mind-boggling stat: The 25 billionth song had been downloaded on iTunes.

That's billion. With a b.

Since launching the iPod in 2001, and iTunes in 2003, Apple has been a leader in digital music, virtually defining the space for competitors like Amazon and Google.

Here are five interesting facts about the milestone:

Investors sour on Apple Is Apple losing its appeal?

Phillip Lupke of Germany was the lucky downloader. For happening to click at the right nanosecond, he'll be getting a 10,000-Euro ($13,528) iTunes gift card.

And it was no easy task. According to Apple, users download an average of 15,000 songs every minute.

You've probably never heard of it.

Sorry. Hipster moment over. We hadn't heard of it either.

"Monkey Drums (Goksel Vancin Remix)" was the jam in question. It's by Chase Buch, a British DJ and producer who's well known in the house-music scene. It's not so big on lyrics. Which is to say, it doesn't have any. And it probably comes across better when you're shaking it in a crowd of sweaty club kids than, say, sipping coffee and doing the New York Times crossword.

Alex Ostrovsky, from West Bloomfield, Michigan, was the luckiest of downloaders. For the billionth download, he scored a 20-inch iMac, 10 fifth-generation iPods and a $10,000 gift card, not to mention a scholarship set up by Apple at the Julliard School of Music in his name.

Obvious, right? But how much is it?

Well, it's roughly equal to three-and-a-half songs for every person on Earth.

By way of comparison, the Guiness Book of World Records lists "White Christmas" as the top-selling song of all time at around 100 million copies. Multiply that by 250 and you get 25 billion.

Michael Jackson's "Thriller" is the No. 1 selling album of all time with more than 42 million certified sales. It would need to do that again almost 600 times to hit 25 billion.

119 -- number of countries where iTunes is available