The impact of a $9 minimum wage 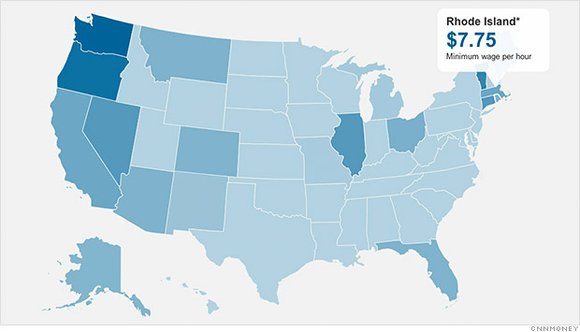 Click on the map above to see the minimum wage in your state.

After promising five years ago to raise the federal minimum wage, President Obama finally unveiled a plan to do so on Tuesday.

In his State of the Union address, Obama pressed to raise the hourly rate in stages to $9 an hour in 2015, up from the current $7.25, and index it to inflation. The change, should it become law, would boost the wages of 15 million Americans, according to the White House.

"Tonight, let's declare that in the wealthiest nation on Earth, no one who works full-time should have to live in poverty,'' he said. '"This single step would raise the incomes of millions of working families ... For businesses across the country, it would mean customers with more money in their pockets."

Obama campaigned in 2008 on a pledge to raise the federal minimum wage to $9.50 an hour by 2011, but he didn't follow through during his first term, despite multiple calls from worker advocates to do so.

Not every minimum-wage worker, however, is paid the federal rate, which translates into $14,500 a year for a full-time employee. Some 18 states plus the District of Columbia have rates above the federal level, with Washington state mandating the highest level at $9.19 an hour. And 10 states automatically increase their minimum wage rates annually to account for inflation.

Were the rate to rise to $9, a full-time minimum wage worker would earn roughly $18,000 a year, which is still below the poverty level for a family of four.

Currently, some 3.8 million hourly workers earn at or below the minimum wage, according to the Bureau of Labor Statistics. That's 5.2% of workers paid an hourly rate. But the federal stats don't include those paid a fixed weekly amount, such as maids or landscapers, whose hourly rate equals the minimum wage. These folks would also benefit from the wage increase.

Obama faces a tough battle getting a rate hike through Congress. The last time lawmakers approved such a bill was in 2007, when they agreed to a three-step increase from $5.15 per hour to the current rate of $7.25 by July 2009.

Raising the minimum wage is a very contentious issue. Democratic lawmakers have introduced bills, including one last year that would have raised the wage to $9.80 by 2014, that have gone nowhere.

Worker advocates say that raising the minimum wage would help boost the economy by putting more money into the hands of lower-income Americans, who are likely to spend it. A 2011 Federal Reserve Bank of Chicago study showed that a $1 hike in the rate increases spending by $2,800 a year in households with minimum wage workers.

"One of the best ways to get the economy going again is to put money in the pockets of people who work, who will spend it at small businesses in their communities," said Christine L. Owens, executive director of the National Employment Law Project, a left-leaning group. "A minimum wage increase will stimulate consumer demand and help drive economic growth for the people who most need it in America -- workers."

The federal minimum wage has lost 30% of its purchasing power in recent decades, according to the law project. If the minimum wage had kept pace with the cost of living since 1968, it would now equal $10.56. The White House says that raising the wage to $9 restores its inflation-adjusted value to where it was in 1981.

Studies have projected a loss of at least 467,500 positions were the hourly rate to go up to $9.80, according to the Employment Policies Institute, which advocates for employers. The most recent boost meant that 114,000 fewer teens had jobs.

"Tight margins -- keeping a few cents in profit from each sales dollar -- means that an employer faced with higher labor costs can't just absorb them," wrote Michael Saltsman, a research fellow at the institute, in an op-ed in the San Jose Mercury News last month.