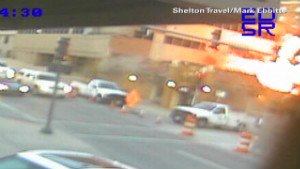 An employee of a subcontractor laying fiber optic cable hit a 2-inch gas line with an underground boring machine about an hour before an explosion killed one person at a popular restaurant in Kansas City, Missouri.

Authorities do not know what caused the leaking gas to ignite, according to Rob Hack, chief operating officer of Missouri Gas Energy.

"But all the damaged points to ignition inside the restaurant," he said.

One body was pulled Wednesday from the debris at JJ's restaurant, a popular place near Country Club Plaza, a locale with upscale shops and restaurants.

Officials said Wednesday afternoon they believed there were no more missing people or undiscovered bodies.

"The people stage has basically concluded," Mayor Sly James told reporters. Authorities were moving into the investigation phase, he said.

One female employee was reported missing after the blast, but Fire Chief Paul Berardi said it was too early to confirm the identity of the victim, whose body was found near the restaurant's bar area.

At least 15 people were injured in the blast.

Berardi released a timeline of events that began with the subcontractor calling 911 shortly before 5 p.m. local time to report the accident.

A Missouri Gas Energy employee showed up about 20 minutes later and, after some initial readings on gas-measuring devices, called for backup, Hack said.

MGE employees on the scene went into businesses and asked people to leave because levels were above the state's threshold for gas concentrations in the air.

The gas company also brought in excavating equipment to try to vent the pipe, but the explosion occurred before they could alleviate the problem. Three of the company's workers were hospitalized, Hack said.

'I thought I was going to die'

The odor of natural gas led to the early closure of JJ's restaurant, but hostess Deidre Estes and other employees weren't in a rush to leave, unaware of the danger they were in.

Then, "Boom! And everything was black," Estes told CNN affiliate KCTV.

The blast ripped the roof off of the restaurant.

A utility crew investigating the odor had suggested that the restaurant close, but gave no sense of urgency or the potential for an explosion.

The mayor confirmed that the fire department responded to a call about the gas odor, about 50 minutes before the blast, but left the scene after being told by the utility company that everything was under control.