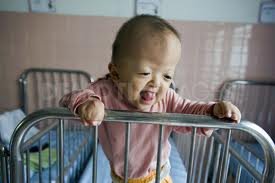 An infant with deformed hands in the Peace Village ward of Tu Du Hospital in Ho Chi Minh City.

As a child in Japan, Hiroko Tanaka saw a television report on Vietnamese twins who were attached at the head at birth. The deformity was blamed on their parents’ exposure to the herbicide known as Agent Orange.

Agent Orange and its active ingredient dioxin is "one of the most toxic compounds known to humans," according to the United Nations.

In the 1960s and ‘70s, during the Vietnam War, the U.S. military used Agent Orange to kill trees and plants that blocked visibility from the air and provided cover for Viet Cong fighters hiding in the jungle.

The defoliant contained dioxin, which can cause cancer and is being investigated for other possible side effects by the World Health Organization. It harmed U.S. soldiers and Vietnamese and contaminated some areas of the country.

The TV report she saw as a child made a strong impression on Tanaka and as an adult she sought to explore the lasting effects of Agent Orange through photojournalism.

Tanaka worked in the U.S. as a staff photographer for a Philadelphia newspaper for four years. In December 2011, she moved to Guatemala to learn Spanish and gain new cultural experiences and now volunteers as a photographer for a nonprofit and also freelances.

While visiting her homeland in 2011, Tanaka hopped a flight to Vietnam for a two-day visit. The hotel receptionist got her an appointment to visit Tu Du Hospital in Ho Chi Minh City, formerly Saigon.

Among other things, the Peace Village ward of Tu Du Hospital cares for about 60 children with severe deformities, many of whom were abandoned at birth, Tanaka said. The hospital blames Agent Orange for deformities in this ward.

“They just live there,” she said. “They don’t go to school; they can’t leave; they don’t go out.”

She also found stillborn babies and fetuses in jars, which are kept for research to find out why the babies were born with abnormalities. The hospital told Tanaka that as children born with deformities skyrocketed, those that didn’t make it were preserved. In the “reference room,” some of the jars were dated back to 2000.

According to the Vietnamese Red Cross, babies born near lands heavily sprayed with the herbicide have illnesses and deformities at a higher rate than normal. Adults in these areas also develop cancer and other health problems at a higher rate, and as many as a million Vietnamese now have health issues associated with Agent Orange, they said.

In part because of political and logistical difficulties, there is so far no conclusive international research showing a direct correlation between Agent Orange use in Vietnam and health problems. Still, the U.S. government recognizes that exposure to Agent Orange and other herbicides causes cancer and additional health problems and presumes certain birth defects in children of Vietnam veterans.

The WHO said a link between wartime use of Agent Orange and conditions like cancer and diabetes is still being investigated.

Developing fetuses are the most sensitive to exposure, and newborns are also vulnerable to some of the effects, they said.

The effects of dioxin can last for generations, said Dr. Michael Skinner, a biologist and professor at Washing State University.

Research done by Dr. Skinner and his colleagues found more dramatic incidences of ovarian and kidney disease in the third generation rats than in their directly-exposed great-grandparents.

Dioxin has an extremely long half-life, around 7 to 11 years, according to WHO, and bio-accumulates in fat cells, which is unusual for most compounds.

Dr. Skinner, who has not examined children in Vietnam, said it is hard to say for sure whether dioxin is the cause of their deformities. But, he said, “Under the appropriate conditions, even without direct exposure, it’s a possibility.”

The chemical can also be consumed by eating large quantities of fish in some parts of the world, as well as working in environments like hazardous waste sites or the pulp and paper industry.

Tanaka said the children at Tu Du are more fortunate than disabled children who stay at home without special care.

“I want people to know they exist,” she said.