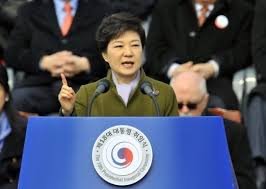 Park Geun-hye made history Monday by becoming South Korea's first female president, pledging to secure South Korea against the threat of an increasingly hostile North Korea at the same time as mending bridges with Pyongyang.

"North Korea's recent nuclear test is a challenge to the survival and future of the Korean people, and there should be no mistake that the biggest victim will be none other than North Korea itself," she said. "I urge North Korea to abandon its nuclear ambitions without delay and embark on the path to peace and shared development."

Reiterating her policy of 'trustpolitik' - a policy based on deterrence combined with cautious approaches to North Korea - she said she intended to "lay the groundwork for an era of harmonious unification where all Koreans can lead more prosperous and freer lives and where their dreams can come true."

"I will move forward step-by-step on the basis of credible deterrence to build trust between the South and the North."

She said South Koreans stood at a new juncture, confronting the difficulties of the global financial crisis as well as the threat from the North.

"I will usher in a new era of hope whereby the happiness of each citizen becomes the bedrock of our nation's strength which in turn is shared by and benefits all Koreans," she said.

When she was elected last December, Park broke barriers in the patriarchal East Asian nation, though she is deeply connected to its past. Her father, Park Chung-hee, was one of the founders of modern Korea who took power after a coup d'etat and ruled heavy-handedly for 18 years before being shot dead by his intelligence chief in 1979.

His memory still divides South Korea -- some regard him as the cornerstone of South Korea's present prosperity, others see him as a dictator who ignored human rights and crushed dissent.

Although she has apologized for human rights violations during his rule, Park has been criticized for not doing enough to distance herself from his legacy.

Still, any concerns about her family's past weren't enough to prevent 52% of voters from elevating her to the presidency.

Park, 61, and her opponent, the Democratic United Party's Moon Jae-in, offered similarly moderate plans during the campaign, addressing income inequality, reining in the power of family-owned conglomerates and improving relations with North Korea.

On North Korea, Park distinguished herself from former President Lee Myung-bak, who demanded an end to Pyongyang's nuclear arms program as a condition of economic aid, by offering a softer, carrot-and-stick approach.

She visited the North Korean capital in 2002 and met with its late leader Kim Jong Il. Since then, his son Kim Jong Un has taken over in Pyongyang, continuing a policy of defiant work on the country's budding nuclear program, including a test earlier this month that drew widespread international condemnation.

"Precisely because trust is at a low point these days, South Korea has a chance to rebuild it," Park told Foreign Affairs magazine before she won the election. "In order to transform the Korean Peninsula from a zone of conflict into a zone of trust, South Korea has to adopt a policy of 'trustpolitik,' establishing mutually binding expectations based on global norms."

Domestically, Park campaigned as a fiscal conservative, advocating tax cuts for business to boost investment and jobs and vowing to restructure welfare programs. At the same time, she promised soon after winning election "to take care of our people one by one."

In a speech at the headquarters of her Saenuri political party Thursday morning, she invoked a phrase coined by her father, who also served as president in an era when he was encouraging people to pull South Korea out of poverty.

"I would like to re-create the miracle of 'let's live well' so people can worry less about their livelihood and young people can happily go to work," Park said.