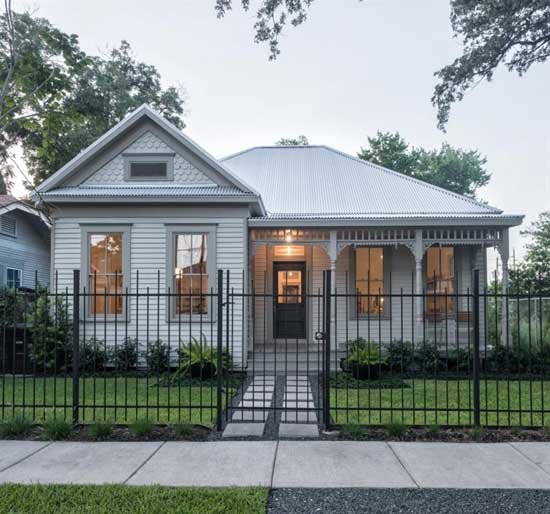 The Otto Pech house at 1810 Summer Street was built circa 1907 in the Folk Victorian style. The house features a gable on hip roof with a partial front porch. The front porch features Folk Victorian detailing such as square turned columns with decorative wooden spandrels running in between. The house was owned by Otto Pech, a carpenter for the Houston and Texas Central Railroad. Pech and his family lived at 1404 Bingham Street and most likely kept 1810 Summer Street as a rental property for railroad employees. At the end of the 19th century the railroad had emerged as one of the City’s largest employers. During this time the First Ward became home to numerous railroad shops, many associated with rail companies such as Houston and Texas Central and Southern Pacific. These companies employed many of the residents from the First Ward. The house went through a major restoration in 2010. 1810 Summer Street was just announced as a winner for Preservation Houston’s 2013 Good Brick Award. City Council designated it as a Protected Historic Landmark. The Montgomery-Reynolds House at 2111 Del Monte was built for Mr. and Mrs. Thaddeus Montgomery in 1938. The house was designed by architect Ellwood E. Stowe of Stowe & Stowe in the Georgian Revival style. Mr. T.C. Montgomery was a life-time railroad man, who held the position of Chairman of the Southern Pacific Railroad union in the mid-1920s. The house was later occupied by Mr. and Mrs. Henry D. Reynolds. City Council designated it as an Historic Landmark.