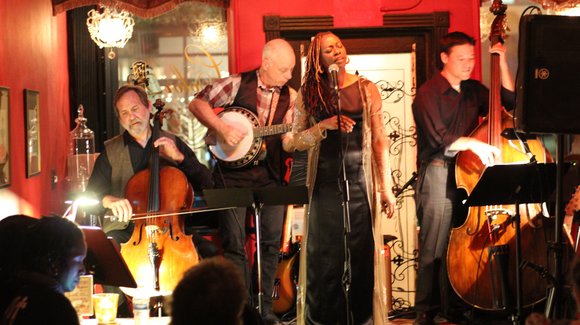 Do you remember where you were when you had your first kiss?

Do you remember what you were doing when you realized you no longer had a landline in your house and didn’t remember numbers by heart?

I will always remember where I was the first time I heard Jacqui Sutton with the Frontier Jazz Orchestra. Walking into a refurbished Leon’s Lounge in the heart of Midtown on a Tuesday night I really didn’t know what to expect and neither did the friend I brought with me. We joked about coming to a place we’d passed by so many times. From the outside Leon’s Lounge looked like a hipster hangout.

To our surprise we walked into a room filled with classical strings, laughter and a voice that couldn’t be ignored. Standing in the doorway we just smiled at each other and listened to what I can only describe as something perfectly unique.

In a world where new is rarely new and the norm is whatever is hot at the moment, the mix of Jazz and Blue Grass caught my ear and my interest was piqued. Being a writer I couldn’t help but notice the details. The deep set booths, the trimming on the walls and doors, the intimate stage. A man on a Banjo, a man on a bass and a man sitting at a cello, all on stage smiling and jamming. Oh… And the woman whose voice was bringing it all together.

Max plays cello with the Houston Symphony. Anthony has a four month old son at home but still manages to play a gig four nights a week with his bass. Paul has over twenty years of jazz experience and has mastered his guitar and banjo. What brought these men out on a Tuesday night to play for a crowd of fifty or so in this quaint hangout? Jacqui has found a way to perfectly blend her soulful voice with jazz, classical, R&B and bluegrass. Turning this group of talented musicians into a mesh of wonderfully harmonic sounds.

“Classical music is about hitting every note just right at the exact pitch in the exact moment. What Jacqui is doing allows us to experiment, improvise, to do something different. That’s why you have a bunch of fussy musicians that work so well together. She has a clear vision and we’ve been doing it for three years now and loving it.” -Paul Chester.

When a band is smiling, light hearted, happy to play with each other that energy feeds into the crowd. You aren’t looking at your watch wondering when the set is going to be over, there’s no wanting to get drunk so you can have your own entertainment.

Good music and a great song selection make for a perfect date night because it’s calming. There was a cover of Adele’s “One and Only,” a rendition of a Billie Holiday song that spoke to the audience, a stronger Blue Grass influenced ballet called “Nature Boy” that spoke of regret.

“If I was still in New York, this sound, this mix, it wouldn’t be possible. When I first recorded with these guys they were hired guns; now we’re family. I’ve been doing music a long time, I just wanted to do something that was unique and true to myself and where I’m from.” -Jacqui Sutton.

A diverse crowd, applause after every song, couples with their arms wrapped around each other vibing to good music and good drinks. As a man that has heard a lot of bands and listened to a lot of music it’s not only cool to hear uniquely different but it’s cool to hear an orchestra that has real soul behind the instruments. The album is entitled Notes From the Frontier: A Musical Journey, and if you’re a music lover like myself I would strongly suggest you pick it up.

If you want a good date find this band in concert and take a break from the norm. Perfect date nights don’t come along often, Tuesday at Leon’s Lounge was one of them, I hate you missed it.

You can read more of Demez at www.demezw.com or @authordwhite on Twitter.