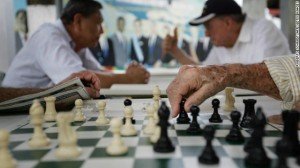 If you take drugs to lower your blood pressure, your medication may also lower your risk of dementia, according to a new study released Monday by the American Academy of Neurology.

According to the study, people taking beta blockers, a class of drugs used to treat a number of conditions including high blood pressure, glaucoma and migraines, were less likely to have less cognitive impairment than those that did not. Beta blockers cause the heart to beat slower and with less force, which reduces blood pressure. They also open up blood vessels to increase blood flow.

For the last 21 years, 774 Japanese-American men between the ages of 71 and 93 took part in the study. Of those, 610 had hypertension or were taking medication to lower their blood pressure. Among those treated, 15% took only beta blockers and 18% got a beta blocker plus one or more other blood pressure medications. The remaining men didn’t take any beta blocker as part of their treatment.

Autopsies performed after their deaths showed the group that took only beta blockers had significantly fewer brain abnormalities like microinfarcts, or the death of brain cells because inadequate blood flow. They also had fewer Alzheimer’s brain lesions and less brain atrophy than other study participants.

“With the number of people with Alzheimer’s disease expected to grow significantly as our population ages, it is increasingly important to identify factors that could delay or prevent the disease,” said study author Dr. Lon White of the Pacific Health Research and Education Institute in Honolulu, who has been studying Alzheimer’s for 30 years. “These results are exciting, especially since beta blockers are a common treatment for high blood pressure.”

Dementia is not caused by one thing, say White. “In fact, it’s probably five or six pathological processes that contribute to the development of dementia and cognitive impairment in late life … Hypertension in mid-life contributes substantially to one or more of those processes, and is responsible for probably 20% of dementia that we call Alzheimer’s disease in late life. The only strategies that we’re really aware of to reduce the risk of late-life dementia is to identify and effectively treat high blood pressure in middle life.”

While the findings are very preliminary, the study is a valuable resource, said neuroscientist Dr. Heather Snyder, director of medical and scientific operations at the Alzheimer’s Association, who was not involved with the research. She says the biggest takeaway is the importance of maintaining a healthy cardiovascular system.

Dr. Daniel Potts is a practicing neurologist and professor at the University of Alabama who treats patients with dementia. For him, it’s personal–his father died of Alzheimer’s disease. Even though more research is needed, Potts calls this a landmark study.

“The study is important for me because it seems to indicate that beta blockers may be more effective than most other blood pressure medications in preventing the brain pathologic changes that are associated with dementia in later life,” Potts said.

“Of course, further study is warranted to confirm these findings and also to demonstrate clinical effects: are patients doing better on them, are they having less memory loss on them? … This study looks at the pathology. It will be nice to look at whether they have clinical effects, day-to-day effects on activities of daily living.”