“The New Geography of Jobs” by Enrico Moretti 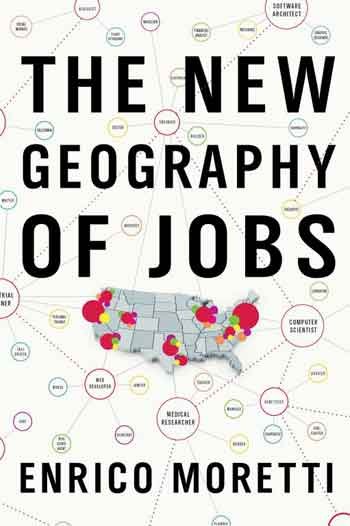 You’ve resisted closing up shop, selling your business, downsizing yourself out of a job. You’ve put off laying everyone off. Most importantly, while so many jobs are going overseas, you’ve resisted outsourcing to China.

Made in America is important to you, and you’re concerned about where our jobs are going. But author Enrico Moretti says you needn’t worry, that Chinese products are good for us. In his new book “The New Geography of Jobs,” he tells you why.

Take a look out your window.

Most of the people you see have what you might call “average” jobs. They’re lawyers, accountants, retail workers, semi drivers. One third of us work for the government. Two-thirds of American jobs are in the local service sector, and Moretti says that that number has been growing for decades.

That’s very good because, through what scientists call the multiplier effect, one new job creates several jobs in other industries. That new employee, after all, needs to spend his salary somewhere, and someone needs to serve him.

Many of those other jobs, it should be noted, are professional in nature while few come from traditional manufacturing. Due to technological progress, we’re more productive than ever, so it takes fewer employees to produce goods. That, and globalization, hurts manufacturing but drives jobs in innovation.

Globalization, says Moretti, is not detrimental for America. Letting other countries provide labor is great, as long as we have something to offer in exchange.

“In a global economy,” he says, “you do not need to excel at everything.” The “principle of comparative advantage” indicates that if we let other countries do what they do best while we do that in which we excel, then we can trade and everybody wins.

Curiously, what we make for trade doesn’t matter.

“What really matters,” Moretti says, “is that American workers produce goods or services that are innovative and unique and not easily reproduced. This is the only way to generate jobs that pay well in the face of stiff global competition.”

So where are the jobs? That’s complicated, and “The New Geography of Jobs” has the answer, but it’s deep and wide.

Author and economics professor Enrico Moretti uses science and hard data to show where the jobs are and why they cluster as they do. He offers ideas on how to end unemployment, he uses real businesses as example, and he cites chilling statistics that are employment-historical in nature.

That makes this a real make-you-think kind of book – which isn’t a bad thing, but it’s very involved and complex. I liked what I learned, but I think the real benefit of a book like this will come in the rumination of its ideas in the days and weeks to come.

If you’re thinking of a career change or new employment, or if job creation is your Number One priority this year, this is a book you’ll want first. You’ll need solid, hard-core information to do it… and for that, “The New Geography of Jobs” is hard to resist.