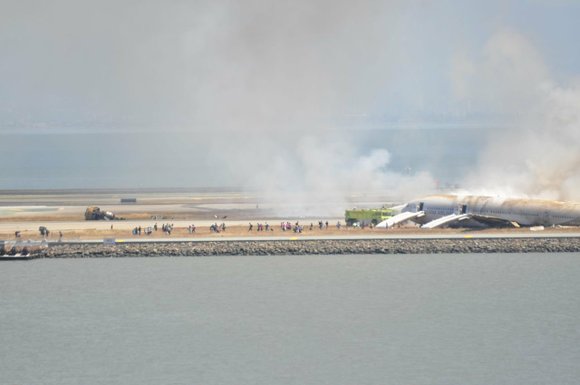 SAN FRANCISCO (CNN) -- Investigators looking into the fatal crash of Asiana Airlines Flight 214 are focusing on the crew and aircraft as they try to understand why the giant jet clipped the end of runway before crashing, the chairwoman of the National Transportation Safety Board said Monday.

"We're certainly looking at the crew and how they operated, how they were trained, at their experience," NTSB Chairwoman Deborah Hersman told CNN's "New Day."

"We're also looking at the aircraft. We're looking to see if the crew was using automation or was flying on autopilot, or they were hand-flying the airplane," she said.

Like many modern aircraft, the Boeing 777 is capable of landing automatically, but it was unclear if the plane's computer was handling Saturday's attempted landing or if it was being done by the pilot, who Asiana said was making his first San Francisco landing at the controls of that model of aircraft.

The plane was flying much slower than the recommended 137 knots (157 mph) as it approached the runway, and onboard systems warned the crew the plane was about to stall moments before the crash, according to the NTSB.

The flight, with 307 people on board, originated in Shanghai, China, and stopped in Seoul, South Korea. It was preparing to land Saturday in San Francisco when the rear of the plane struck the edge of the runway, severing the tail. Most passengers were able to escape before the plane erupted in smoke and flames.

Two people died, although the San Francisco Fire Department said one of those may have been run over by an emergency vehicle, San Mateo County Coroner Robert Foucrault said.

The victims, teenagers Ye Mengyuan and Wang Linjia, were among 35 Chinese students headed to California to attend West Valley Christian School's summer church camp, the school said on its website.

NTSB spokeswoman Kelly Nantel said the agency was aware of the reports that one of the girls may have died after being run over on the tarmac but did not have details.

The San Francisco Fire Department has not responded to CNN's request for comment.

Lee Kang-kuk, the pilot who was in the captain's seat of Flight 214, had flown from Seoul to San Francisco several times between 1999 and 2004, the airline said.

But Saturday marked his first time landing a Boeing 777 at San Francisco International Airport and was the ninth time he had flown the model, with 43 hours at the controls, the airline said. He has about 10,000 hours as a pilot, Asiana said.

Hersman, who has discouraged speculation about whether the crew bore responsibility for the crash, downplayed the significance of the pilot's experience in her "New Day" interview.