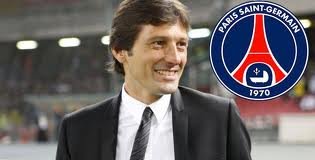 The man who helped bring David Beckham, Zlatan Ibrahimovic and Thiago Silva to Paris Saint-Germain as part of its empire building is leaving the Qatari-owned French club.

A key figure in the club's revival thanks to his extensive network of contacts, Leonardo handed in his resignation as sporting director, signaling the second major departure from PSG in two weeks after coach Carlo Ancelotti -- Leonardo's friend -- left for Real Madrid.

"Leonardo has informed Paris Saint-Germain of his desire to resign from his position as Sport Director at the end of the current transfer window," PSG said in a statement Wednesday. "We regret this choice but respect his decision.

"We thank him greatly for his important contributions towards the project of building a top European club in Paris and wish him all the best for his future career choice."

Earlier this month Leonardo's suspension for shoving a referee following PSG's 1-1 draw with Valenciennes in May was extended from nine to 13 months, although the ban wouldn't have affected most of his duties as sporting director.

When Leonardo was hired by PSG in July 2011, he said he wasn't overawed as he sought to turn the team -- backed by the wealthy owners -- into a global powerhouse. He called the challenge a "buzz."

With Ancelotti at the helm and the likes of Ibrahimovic, Silva and the now retired Beckham -- for a short while -- on the pitch, PSG last season claimed the league title for the first time since 1994.

The influx of cash didn't hurt. The owners invested an estimated more than $195 million in the club, turning it into the highest-spending side in Europe.

In Europe the campaign was also a success, as inexperienced PSG reached the quarterfinals and was only knocked out on away goals by Barcelona thanks to Lionel Messi's late cameo.

Almost one million people tried to obtain tickets for the first leg that was played in PSG's 45,000 capacity Parc des Princes stadium.

Before the Brazilian leaves, PSG could tie up a deal for sought after Napoli striker Edinson Cavani, a boost for Ancelotti's managerial replacement Laurent Blanc.

The transfer window in France closes on August 31, with PSG kicking off the defense of its Ligue 1 title at Montpellier on August 9.

But it wasn't all smooth sailing for Leonardo. Besides his suspension, he clashed with Ibrahimovic in the dressing room after PSG won the title and has drawn criticism for some of PSG's signings, including Javier Pastore.

The Argentinean's transfer fee was a hefty $54 million.

Leonardo collapsed and had to go to hospital shortly after his altercation with Ibrahimovic, sparking reports he was stressed.

Leonardo, like Blanc a World Cup winner, earned more than 50 caps for Brazil and was a fan favorite during his four years at A.C. Milan, the club most commonly associated with Ancelotti.

He turned to management when his playing days were over, spending a season at both A.C. Milan and its city rival Inter.