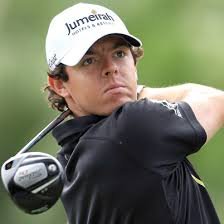 Unconscious. Brain dead. Rory Mcllroy was in a brutally reflective mood in the words he chose to describe his opening round in the British Open

The world no.2 carded an eight-over-par round of 79 as the world's golfing giants made their first forays on Scotland's testing Muirfield course.

All the golfers are contending with the rarities of a British heatwave but McIlroy said he was tortured by a long-term torpor.

"Sometimes I feel like I'm walking around out there and I'm unconscious," said McIlroy, a two-time major winner, told the media.

"I just need to try to think more. I'm trying to focus and trying to concentrate.

"But I can't really fathom it at the minute, and it's hard to stand up here and tell you what's really wrong

"It's just so brain dead. Seriously, I feel like I've been walking around out there like that for the last couple of months. I'm trying to get out of it."

McIlroy lost his top ranking to Tiger Woods in March and the Northern Ireland golfer is still searching for his first win in 2013, having only chosen to enter seven tournaments before the Open.

The 24-year-old's slump in form has also been linked to his switch to Nike equipment this year in a deal reported to be worth $250m.

McIlroy struggled to the turn at Muirfield in one over before two painful double-bogeys and four bogeys on the back nine left him searching for answers.

A comeback of epic proportions is required if McIlroy can make the cut for the third major of the year.

"I want to try to be here for the weekend," McIlroy said. "But the thing that I need to do tomorrow is just go out there and freewheel it and try and make birdies and try and play with that little bit of whatever it is I have usually."

McIlroy faced questions about his dubious form on the eve of the Open with suggestions his high-profile relationships with Danish tennis player Caroline Wozniacki was a distraction.

But he rebuffed that suggestion, saying: "No, not at all, no, no. It's not that at all. No, I'm fully focused on the golf out there."

McIlroy wasn't the only golfer mired at Muirfield, where temperatures nudging 80 degrees Fahrenheit (26 Celsius) had hardened the course and sped up the greens.

U.S Open winner Justin Rose finished on four over par after carding a 75 which included just a single birdie on the 17th hole.

Tiger Woods, on the hunt for his first major win since 2008, was one over at the turn while fellow American Zach Johnson, winner of the 2007 Masters, held the clubhouse lead with a five-under 66.