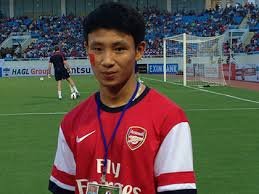 By John Sinnott and James Masters

He runs alongside the Arsenal coach in Vietnam's capital Hanoi mile after mile. He bumps into trees and lamp posts but keeps on running.

At one stage he beats his hand against the badge of the red and white Arsenal shirt that he is wearing, mimicking an often used footballer's goal celebration. Eventually to keep up with the coach he hops on a moped.

The "Running Man" -- as Vu Xuan Tien has been dubbed -- gets his reward when the Arsenal coach stops and he is invited on board to meet the players and manager Arsene Wenger, who all sign his shirt.

Man gets on Arsenal bus. Cue international headlines as the "Running Man" goes global. Welcome to the power of English football in Asia.

"It should be a message for all of you guys that if you really want to pursue your dreams, it can happen," goalkeeper Wojciech Szczesny told the Arsenal website.

But the "Running Man" is not the only one working his socks off in Asia at the moment.

Arsenal are one of a number of English Premier League clubs touring Asia and Australia -- others include Manchester United, Liverpool and Chelsea -- as part of their pre-season preparations. The new season kicks off on August 17.

"Tours provide us with an opportunity to build our global following, and are also a great opportunity to bring thousands of supporters further afield closer to the club by giving them a chance to interact with us personally," an Arsenal spokeswoman told CNN.

"From a business perspective it's also important we show our commitment to building our name around the world to become more attractive to potential commercial partners and to support some of our existing partners' business objectives for whom Asia is also an important market."

The business case is clear, but to travel thousands of miles round the world, to train in humid conditions and wake up in a different hotel bed each morning seems -- on the face of it -- perhaps not an ideal way to prepare for the rigors of the English Premier League season and the challenge of the Champions League.

United forward Wayne Rooney was an early casualty of the club's three-week trip to Asia, with the England international having to fly home on the tour's opening day with a hamstring injury.

Dutchman Alex Buttner also picked up a hamstring injury in their friendly defeat to the Singha All-Stars in Thailand -- United's first match on the tour -- to join Rooney in the treatment room.

United did not respond to CNN's questions regarding the financial importance of the Far East to the club or the physiological efficacy of these tours as a way of preparing players for a new season.

"Unfortunately from a physiological perspective and as preparation for the upcoming season I can't see too many positives and more importantly there is significant chance of injury," Dr Craig Duncan of the Australian Catholic University, who until recently was Sydney FC's head of human performance, told CNN.

"It's a disruption and I know from my perspective in preparing teams I prefer to be based in our home location which is familiar and has all the requirements that the players require.

"The impact of travel can't be underestimated and with changing time zones comes much needed adaptation and thus loss of valuable training time.

"Players are vulnerable to injury when fatigued and travel will increase fatigue so if coaches are not careful with training loads there are potential injury issues."

Last season the Premier League kicked off on August 18, but September had the highest injury incidence rate of the season with 61 separate problems recorded in the month, whereas December showed the lowest 0.46 per game, according to respected website Physio Room.

"This isn't unusual and often it's a problem with the preparation," said Duncan.

"Clubs sometimes expose their players to a pre-season that has too great a training load. They see it as a time to get in as much work as possible to get them ready for the busy season ahead.

"However, the consequence of this is fatigue, thus players head into the new season in a fatigued state which exposes them to the risk of injury.

"Alternatively, if they haven't been prepared adequately (training load too low) they are also at risk at the onset of the season as the intensity is very high.

"Preparation of a team is a balancing act -- you must expose them to sufficient training load to have the players ready but not too much so that they are overly fatigued."

The allure of Premier League clubs can be seen by the 95,000 crowd that is expected to watch Liverpool play Melbourne Victory on Wednesday.

Prior to arriving in Australia, Liverpool were in Indonesia, when Asia-focused bank Standard Chartered extended its sponsorship of the club, continuing one of the most lucrative deals in English sport.

The bank, which makes almost all its money in Asia, the Middle East and Africa -- regions where Liverpool has a strong following -- has been the club's shirt sponsor since July 2010.

The original deal was worth about $30.5 million a season and reportedly the new terms are broadly similar.

Liverpool did not respond to CNN's questions regarding the financial importance of the Far East or player well-being, but the club's former head of fitness and conditioning Darren Burgess was more forthcoming.

"The attitude of the Liverpool players was outstanding when I was there," said Burgess, who is now high performance manager at Port Adelaide in Australia. "They realize it's part of playing for a big club.

"However there's no doubt that the majority of coaches and players would rather complete pre-season at their local training centers.

"They can train in familiar surroundings, sleep in their own beds, have access to all the equipment they would need and not have the physical and mental interruption of travel.

"Physically it would definitely make for a more effective pre-season period.

"As far as countering fatigue, we tried to get the players into the Asian time zone as soon as possible and we adjusted training loads to avoid the injury risks associated with long-haul flying and pre-season training.

"We monitored the players heavily so we knew exactly who was coping with the heat/travel/training and who wasn't so we'd like to think the injury risk was minimized."

Premier League stars better get used to spending more of their time out in Asia -- the financial opportunities appear to be just too great to ignore.

"The support shown to us since we arrived in Indonesia, Vietnam and now Japan has been incredible," said the Arsenal spokeswoman.

"Tens of thousands of supporters have attended our activities and pre-season matches on tour in Indonesia and Vietnam, and our first fixture in Nagoya in Japan has already sold out days ahead of the fixture."

"A new generation of supporters in each country is able to interact with the club first hand, and we hope that builds a connection that lasts for many years to come.

As British sports business expert Simon Chadwick points out for most Premier League clubs less than 10% of the annual turnover comes from overseas sales, which means there is plenty of potential growth abroad.

"However, most clubs lack either the expertise or the infrastructure to capitalize upon these revenues, plus there is a physical limit to the amount of business a club can do overseas.

"They simply can't go and play in China each week where direct player/club relations are the most important point of engagement for fans in places like China.

"That's interesting, as it hints at the potential development of globally franchised clubs in the future as we've seen with Manchester City in the MLS."

Which means the "Running Man" better keep on running because that Arsenal coach is likely to be soon back in Hanoi.